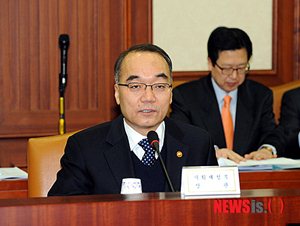 Korea’s finance minister expressed concern yesterday about the spending pledges being made by politicians ahead of the general and presidential elections this year, and said his ministry would crunch the numbers on the proposals.

“Uncertainties over Korea’s future policy directions are mounting because of populist pledges that are being rushed out ahead of the election season,” Bahk Jae-wan said during a crisis management meeting held at the government complex in Gwanghwamun, Seoul.

“To counter such moves, the ministry will closely study them and judge their sustainability,” he said.

Bahk’s comments came several days after President Lee Myung-bak urged the government to closely examine “irrational” bills that are being pushed through the parliament, including a proposed law to compensate customers of 18 suspended savings banks beyond the coverage of deposit insurance, and a bill that would allow the country’s financial authority to fix credit card transaction payment rates.

“Based on studies by some research institutes, the rash policy promises could slow down overall economic activity,” Bahk said.

“Public concerns are also mounting over excessive welfare promises and other pledges that go beyond the government’s means,” he said.

As for the opposition Democratic United Party’s promise to scrap Korea’s free trade agreement with the United States if it isn’t renegotiated, the finance minister said, “The move goes against Korea’s existing strategic plan for economic growth.

“It could negatively affect the country’s overall sovereign credibility and reputation in the world,” he said.

Opposition party lawmakers say the trade pact signed by President Lee Myung-bak is more favorable to the U.S. than the original pact signed by the late President Roh Moo-hyun, who was a liberal.

“The political circles should get a longer perspective and act with prudence so that the Korus FTA goes into effect according to plan,” Bahk said.

He also urged related ministries to actively support Korea’s FTA negotiations with China, which are supposed to start soon.

Regarding overall economic trends, Bahk said there are positive signs but it was too early to judge if recovery is actually happening.

He said that the Korean economy has credibility amid the economic slowdown as seen by the Kospi reaching 2,000 points on Feb. 8 for the first time in six months.