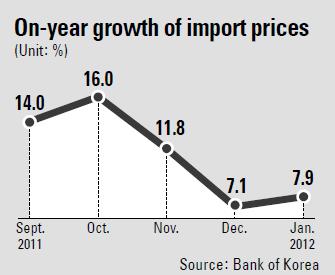 Consumer prices may have stabilized in January but signs are already surfacing that inflationary pressure could build steam in the coming months to further burden households.

Inflation dropped to 3.4 percent last month, posting its lowest growth rate in a year and marking a positive turnaround after it hovered above 4 percent at the tail end of 2011.

However, as the mercury dipped to half-century lows this winter, skepticism reigned and fears grew of a near-future spike in vegetable prices. Cheaper produce was one of the main reasons why the overall level of inflation eased last month.

The price of Dubai crude, which accounts for 80 percent of the nation’s total oil imports, increased 3.8 percent from $105.5 per barrel in December to $109.5 last month. The price rise was exacerbated by the volatile Korean won, which edged down 0.1 percent against the greenback over the same period.

Even local gas stations are selling oil above 2,000 won ($1.78) per liter, adding upward pressure to people’s monthly spending. And the situation is expected to get worse.

Foreign investment banks including Morgan Stanley, Barclays and Goldman Sachs have warned that Korea could face higher inflation as oil prices - which have been growing at a decelerated rate due to the global economic slowdown - could surge again following the U.S.-led sanctions on Iran.

The confrontation in the Middle East, which also involves Israel, is already affecting international crude prices. Dubai crude oil is already trading above $115 per barrel on Singapore’s commodity exchange, while Texas light sweet, also known as West Texas Intermediate, has climbed above $100 per barrel in the last month.

Additionally, the possibility of a third round of quantitative easing in the U.S. in the second quarter may also have a negative impact on Korea’s consumer prices, driving them further north as additional liquidity floods the local market.

The government and central bank have been criticized by market observers as well as the public for failing to tame inflation with sufficient preemptive measures that would tighten the nation’s monetary policy.

The BOK has raised the nation’s key borrowing rate from its all-time low of 2 percent to 3.25 percent since 2010. However, the bank’s governor Kim Choong-soo kept it unchanged for the eighth consecutive month last week, blaming persistent uncertainties in the world market.

He said last week that the central bank must broaden its role to focus on steadying the financial market by adopting more prudent macro-economic policies in response to the risk of emerging economic shocks at home and abroad.