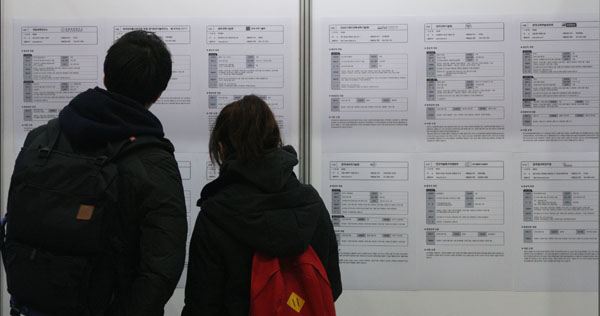 Kim Jung-hwa, an English major in his final year at Seoul’s Hanyang University, recently decided to delay completing his last semester in order to take an internship at a foreign bank.

With little time left before the 26-year-old was due to graduate, the growing sense of anxiety he felt at the prospect of facing Korea’s highly competitive and shrinking job market proved overwhelming.

“I decided to take the semester off to improve my language and working skills, and ultimately my competitiveness,” Kim said. “On weekdays, I work as an intern at a foreign financial firm, and on weekends I study English.”

Unemployment, especially for young people, is a growing social headache for the public and government, but there is little room for improvement this year as large companies are expected to slightly scale back their recruitment drives.

Some 262 of the country’s top 500 firms by sales plan to hire 28,412 new employees this year, down 1.3 percent from last year, according to a survey conducted by the Korea Chamber of Commerce and Industry and job agency Incruit. Job Korea anticipated a larger drop of 2 percent at the same companies.

The survey showed that major companies plan on hiring an average of 108.4 new employees this year, compared to 109.8 last year.

“Though the percentage drop isn’t that big .?.?. this year’s job market remains bleak and more people will find it difficult to find a placement,” said an official from the chamber.

The electronics, petrochemical, and food and beverage sectors are each expected to see new hires grow by between 0.6 percent and 3.6 percent in 2012, while the auto, retail, distribution and construction sectors are due to curtail their searches for new recruits, with textiles workers the hardest hit by negative growth of 29 percent.

Companies say Korea’s slower-than-expected economic growth, coupled with the global downturn, is pushing them to hire less as they rely for much of their income on exports.

Meanwhile, the nation’s trade balance posted a deficit last month for the first time in two years, according to the Korea Customs Service. Korea’s trade deficit stood at $2 billion in January, compared to a surplus of $2.3 billion in December. The decline was mainly led by falling exports in sectors including ships and mobile communications equipment.

The Ministry of Knowledge Economy yesterday expressed concern that Korea’s exports may grow at a much slower pace this year.

The effect is being felt far and wide. Korean Air, for example, hired a record 2,700 new employees last year, including cabin crew, up 30 percent from 2010 after it purchased five new Airbus A380 airplanes. However, it does not intend to bulk up its workforce this year after being hit by rising oil costs, it said.

“Last year, oil prices and the won-dollar exchange rate rose significantly and our operating profit dropped,” said an official from the carrier. “This year, we will hire fewer people and draw more on our recent hires.”

Choi Sung-keun, a senior researcher at the Hyundai Economic Research Institute, said that “both domestic and overseas economic conditions are expected to deteriorate this year, so companies will struggle to significantly expand their workforces.”

A Statistics Korea report yesterday showed that Korea’s jobless rate grew to 3.5 percent in January from 3 percent in December. This was just above last year’s average of 3.4 percent.

The government report showed that young people are among the hardest hit, with the unemployment rate for those aged between 15 and 29 reaching 8 percent in January, up from 7.7 percent the previous month. This is the highest since last April, when it stood at 8.7 percent.

Kim said many of his friends have submitted scores of applications but have met with little success. “Finding a job nowadays is like searching for a needle in a haystack,” he added.

As such, college graduates may be well-advised to switch their attention from big businesses to small and medium-sized firms, many of which have reported difficulties in hiring young people in their 20s and 30s recently due to a paucity of applicants.

According to the Small and Medium Business Administration last year, a survey of 8,000 small manufacturing firms found that they recruited proportionally fewer young people last year despite ramping up overall employment by 0.9 percent from 2010.

Of the 2.08 million new employees they registered last year, 12.8 percent were in their 20s and 30.7 percent in their 30s. This marked an on-year drop of 1.6 percentage points and 4.5 percentage points, respectively.