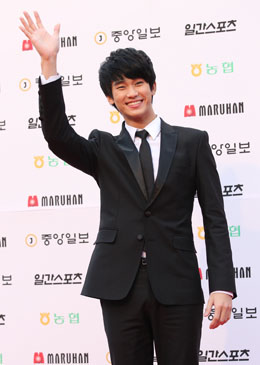 Celebrity sensation Kim Soo-hyun has been named the first model for Beanpole's new casual wear line Beanpole Outdoor, according to the company.

"We believe that Kim Soo-hyun is one of the most celebrated actors in their 20s, possessing a chic and versatile image among his peers. Thus, we thought that Kim's image and the brand's concept blended perfectly," a Beanpole Outdoor representative said.

Kim will start shooting advertisements for the spring/summer catalog soon. As a subunit of Beanpole, the outdoor brand will showcase chic and outdoorsy apparel that is suited for city dwellers.

Kim's popularity has been on the rise recently. Leading up to Valentine's Day, the 24-year-old star was picked by people aged 20 to 30 as the star to whom they would most like to give chocolates on Valentine's Day.

Kim is currently playing the role of a king in the hit MBC drama "The Moon Embracing the Sun." The show made its debut on Jan. 4 and is now the highest-rated weekday drama. It tells the story of a love triangle between three members of the royal family during the Joseon Dynasty.