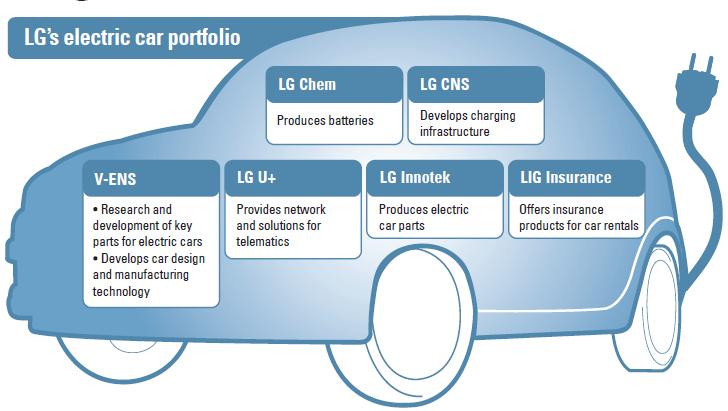 LG’s traditional cash cows have been consumer electronics and home appliances, not cars. But with the convergence of information technology and the automobile industry, LG sees a way to make money from cars.

LG’s ambitions stretch from batteries and other electric car parts to car designs and a partnership with car rental businesses.

They involve a string of affiliates such as LG Chem, its chemistry unit, LG CNS, its information and communications technology subsidiary, mobile phone unit LG U+, as well as LIG Insurance.

Last April, LG Chem completed the world’s largest electric car battery plant in Ochang, North Chungcheong, which is capable of turning out batteries for 100,000 vehicles per year. This April, the company will start the full operation of an electric car battery plant in Holland, Michigan, which will be capable of producing units for 60,000 vehicles per year.

LG believes its production capacity for electric car batteries will increase from 100,000 vehicles at present to 350,000 by next year.

And the company, whose clients include GM, Ford and Hyundai Motor, is eyeing a 25 percent share in the global electric car battery market.

“We hope to cement our footing in the global market this year by strengthening our price competitiveness and differentiating our products,” Song Chung-seop, an LG Chem spokesman, said.

It signed a partnership with the city of Incheon last September to build a research and development center on a 90,000-square-meter (22-acre) plot that will be dedicated to parts for electric cars.

“LG Group will oversee the planning of the research facilities,” a V-ENS official was quoted as saying by a business daily.

He added that the planning will be completed by the end of this year.

LG U+ is joining in. It struck a deal with Korea Car Sharing, a car rental company, to provide a communications network, a customer database system and location-based services.

LIG Insurance is in the process of devising an insurance product for Korea Car Sharing.

This followed the group’s announcement last fall that it would invest 8 trillion won ($7.1 billion) by 2015 in “green businesses,” including electric car components, light-emitting diodes, solar energy and water treatment.

“On Chairman Koo Bon-moo’s orders, we are seeking various opportunities not only in the electric car business, but also the general car industry,” an LG official told the media.

LG Innotek, which makes light-emitting diodes used in TVs, has been providing motors and sensors to car makers and said in January that it recorded annual sales of 312.3 billion won for the business in 2011.

Until now, the company used LG’s batteries for its electric and hybrid cars, such as the Sonata Hybrid and K5 Hybrid. Recently it switched suppliers to SK Innovation, which could be an indication of strained ties.

A Korean daily recently quoted a high-ranking executive of Hyundai Motor Group dissing LG’s move in autos. “LG U+ and Hyundai Motor collaborated years before on the telematics [Internet in cars] business,” he was quoted as saying, “But the results weren’t good.

“LG U+ actually approached us offering their network in our cars, but it wasn’t successful,” he was quoted as saying. “It appears that is why it opted to do business with Korea Car Sharing.”