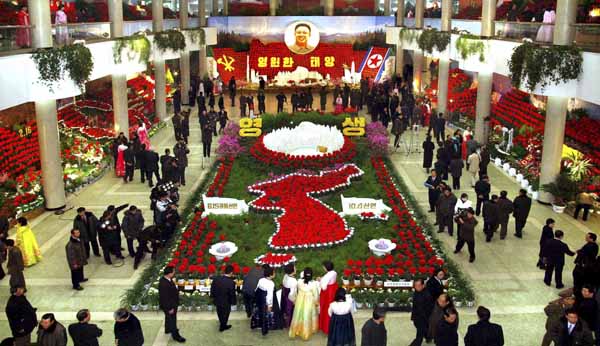 North Koreans admire displays of flowers during the 16th Kimjongilia Festival on Tuesday to mark the 70th birthday of the North’s late leader Kim Jong-il in Pyongyang. [REUTERS/YONHAP]

Following the death of leader Kim Jong-il late last year at the age of 69, North Korea is planning a big celebration for his 70th birthday tomorrow, and has awarded him posthumously the nation’s highest military title.

His father, North Korean founder Kim Il Sung, was awarded the same honor at the age of 80.

The regime’s artisans Tuesday unveiled an 18-foot (five-and-a-half-foot) bronze statues of Kim Jong-il and his father riding horses. The new Korean leader, Kim’s youngest son Jong-un, reportedly ordered the statues made but didn’t appear at Tuesday’s unveiling ceremony, according to the media.

North Korea also promoted 24 generals Tuesday, including Kim Jong-gak, a four-star general who was made vice marshal. According to South Korea’s Ministry of Unification, there are now seven vice marshals in North Korea.

Kim Jong-gak is senior deputy director of the General Political Bureau of the Ministry of People’s Armed Forces, a key body in the communist country, and a member of the party’s Central Military Commission. Kim is considered a powerful guardian for Kim Jong-un, along with others such as Ri Yong-ho, chief of the general staff of the Army, and Kim Yong-chol, chief of the North Korean Army’s reconnaissance bureau, the spy agency against the South. Kim Yong-chol was promoted to four-star-general Tuesday.

In South Korea, Kim is blamed for a string of attacks on the South, including the torpedoing of the Cheonan warship in 2010, a massive cyberattack on a bank in 2011 and the dispatching of assassins in 2009 to kill North Korea’s highest ranking defector Hwang Jang-yop.

The KCNA also reported Tuesday that the regime decided on Feb. 9 to award medals inscribed with Kim Jong-il’s portrait to 132 officials, including Kim’s sister Kim Kyong-hui and her husband Jang Song-thaek, both considered guardians of the new leader.

The KCNA also said Kim Ok, Kim Jong-il’s former secretary and the de facto first lady in his later years, was also awarded the medal. It’s the first time that North Korea’s official media has printed her name. She wasn’t on the funeral preparation committee for Kim Jong-il, which analysts considered a map of the inner circle in Pyongyang.

Commemorative coins in gold and silver will be also produced for the birthday, the KCNA said Tuesday. They will be inscribed “Great comrade Kim Jong-il will live forever.” Three postage stamps and a dozen books describing the guidance trips of Kim will be released.