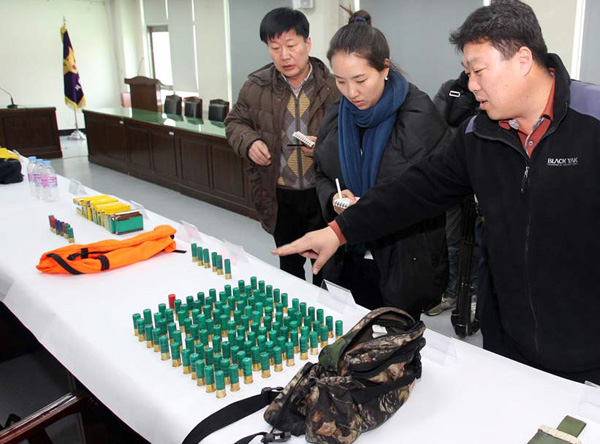 Police examine a shotgun, shells and other items confiscated from a former employee of a car parts manufacturing factory in Seosan, South Chungcheong, who went on a shooting spree that killed one person and injured two. [YONHAP]

A 31-year-old man opened fire on his former co-workers at an automobile parts factory in western South Chungcheong, killing one and injuring two, and then led police in a nearly one-hour, high-speed chase on a major highway, shooting at them as he drove.

The suspect, surnamed Seong, worked at the car seat manufacturing plant three years ago in Suseok-dong, Seosan, a city in western South Chungcheong.

After his arrest, he told police, “During the period I worked at the factory my coworkers bullied me, so I wanted retaliation,” according to police.

Yesterday morning, Seong parked a Ssangyong Musso SUV registered in his father’s name in front of the car seat plant.

At 9:40 a.m., he allegedly fired 10 shots at six employees who were on a smoking break outside the plant.

Three were hit. A 38-year-old worker surnamed Choi was killed, and two workers were seriously injured and taken to the hospital, one 30 years old and the other 56.

Soon after the shootings, Seong fled in his SUV and eventually headed north on the Seohaean (West Coast) Expressway, which runs down the west coast of Korea.

Five minutes after the shootings the police received a report and at 9:51 a.m. confirmed the location of Seong’s vehicle on the highway through CCTV cameras.

Five patrol cars began to pursue him. During the chase, Seong fired several times at the police cars, shattering one car’s window.

One policeman rammed his patrol car into the speeding SUV to halt Seong and then tasered him.

Before that, Seong had allegedly swallowed pesticides he had in his car, and he was taken to a hospital in Seosan for treatment. There is no risk to his life. After Seong was arrested, police found 111 shotgun shells strapped around his waist and another 147 in a bag.

The firearm used in the shooting was a meter-long shotgun for hunting wild animals such as boar. It was registered under Seong’s name.

Earlier that morning, Seong visited the Dangjin Police Station around 8:50 a.m., where the gun was stored, and checked it out, saying he was going to Jecheon in North Chungcheong to hunt.

According to the factory, Seong was employed there for three months.

The police are questioning employees and supervisors at the factory to find out what happened three years ago.

Once Seong recovers from the pesticide he drank, police will further question him about his motivations.