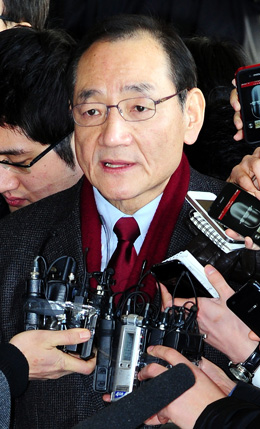 The prosecution yesterday summoned a former senior secretary to President Lee Myung-bak for questioning as it sped up the investigation into a vote-buying scandal that began with the leadership election of the ruling party in 2008.

Park Hee-tae, the secretary’s former boss who went on to win that election, is also expected to be called in soon.

“I am very sorry for causing concern to the public,” Kim Hyo-jae told reporters before entering the Seoul Central District Prosecutors’ Office in Seocho-dong, southern Seoul, yesterday morning. “I will be sincere in the prosecution investigation.”

Kim, former senior presidential secretary for political affairs, was chief campaign director for Park during the July 2008 leadership election of the Grand National Party, which is now called the Saenuri Party. Park served as GNP chairman between 2008 and 2009 and became the National Assembly speaker in 2010.

Kim is suspected of ordering the delivery of an envelope carrying 3 million won ($2,600) in cash and Park’s name card to at least one GNP lawmaker, Koh Seung-duk, who blew the whistle on the case in January, right before the 2008 election. Kim expressed his intention to resign from the Blue House last Friday, and President Lee received the resignation on Monday.

Park, suspected of being behind the scheme, also resigned as National Assembly speaker on Monday, becoming the first Korean parliamentary leader to step down without finishing a term over a bribery scandal.

Kim didn’t answer questions from reporters at the prosecution building yesterday about whether he gave the order to deliver money or if he demanded that his subordinate officers at Park’s camp deny his involvement.

Goh Myeong-jin, an aide to Park, recently confessed to the prosecution that he returned the envelope from Koh to Park’s chief secretary and reported it to Kim, reversing his previous remarks that he was the only one involved.

Kim merely closed his eyes when asked whether Park had known about the distribution of the money.