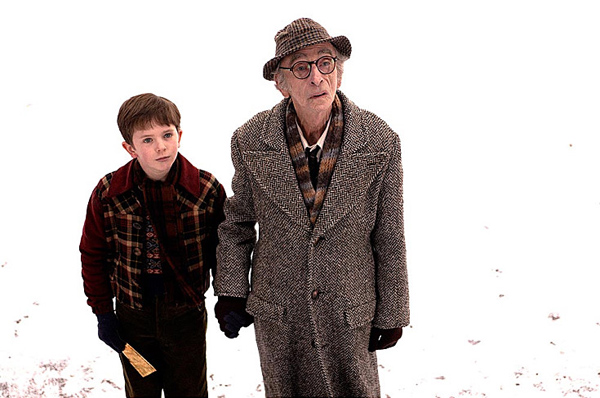 Irish character actor David Kelly, right, who played Grandpa Joe in “Charlie and the Chocolate Factory” died Sunday on Feb. 12 in Dublin. He was 82 and the cause of death was not announced. Provided by Warner Bros.

DUBLIN - Irish character actor David Kelly, who played Grandpa Joe in “Charlie and the Chocolate Factory” and motorcycled naked in “Waking Ned,” died Sunday, Feb. 12, in Dublin. He was 82 and the cause of death was not announced.

During a career that spanned half a century, the actor worked on stage and in film, TV and radio.

Kelly was best known in Ireland for his 1980 depiction of doomed tenement dweller Rashers Tierney in the historical miniseries “Strumpet City” and for his large body of work as a Dublin stage actor in the 1950s and 1960s.

British and Irish TV viewers would also recognize his face and bony frame from short, usually comedic turns on myriad soaps and sitcoms, most memorably as a work-dodging Irish builder opposite John Cleese in a 1975 episode of “Fawlty Towers.” He also played a dim-witted, one-armed dishwasher in the late 1970s British sitcom “Robin’s Nest.”

Irish comedian Niall Tobin, who worked alongside Kelly in the 1990s village comedy-drama series “Ballykissangel,” said Kelly “would make you laugh all the time. Even when he was in the depths of a hangover, he would make you laugh.”

Kelly was usually consigned to bit parts in film, and his two most prominent roles came late in life.

In 1998’s “Waking Ned” he portrayed an Irish villager who must impersonate the late Ned Devine to collect a huge lottery win - and finds himself hurtling down a muddy road, naked apart from his motorcycle helmet, socks and shoes, to keep the ruse intact.

In 2005 he played Charlie Bucket’s grandfather in Tim Burton’s adaptation of the fantasy world of Willy Wonka. That year he also received a lifetime achievement award from the Irish Film & Television Academy.

He is survived by his wife, actress Laurie Morton, and their two children.