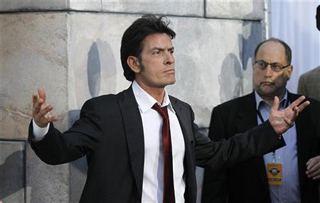 LOS ANGELES - The makers of the TV comedy “Two and a Half Men” have told Charlie Sheen to stop using their photos to promote his upcoming new show “Anger Management,” industry sources said on Wednesday.

Lawyers for Warner Bros. television studio sent a cease-and-desist letter to Sheen and the makers of “Anger Management,” claiming ownership of at least two photos of the actor from his years with “Two and a Half Men.”

The legal letter said the photos were used in material distributed at a TV industry marketing event in January to promote Sheen’s new program, which is due to be broadcast on the FX network later this year, the sources said.

An FX spokesman said the network had nothing to do with the promotional materials at issue.

Sheen was fired from his starring role in “Two and a Half Men” last year in a bitter public dispute with the comedy’s creator and its makers. The wayward actor was replaced in September with Ashton Kutcher.

“Anger Management” is loosely based on the 2003 film of the same name. It will see Sheen playing a therapist who causes chaos in the lives of his patients with his unconventional methods. Reuters