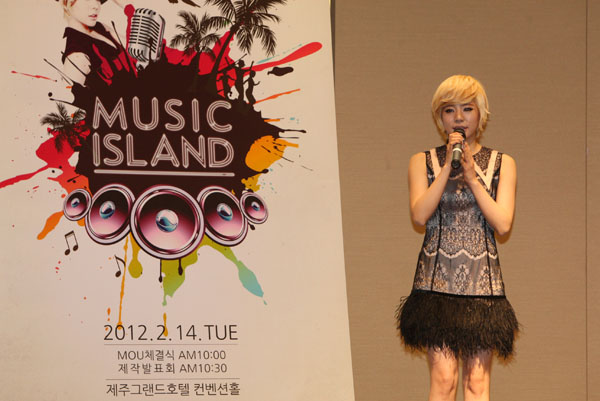 Sunny at the press conference for the the new K-pop program "Music Island" which she will host. Picture provided by SBS Contents Hub


Sunny from Girls’ Generation was in Jeju on Feb. 14 for a press conference to announce “Music Island,” a joint venture by SBS network and MTV. The K-pop star will host the new music program.

“Sunny was picked to be the host as she is an all-round entertainer as well as being a member of an iconic K-pop group. We really believe that Sunny has the talent, not just as a singer, but as a host, to draw people in and that’s why we begged her to host the show,” Kim Chang-woo, a representative of the program said.

“I hope that as a good host I will be able to present a show and music that is relatable to a wide audience as well as be able to tell the heartfelt stories from the artists on the show,” Sunny said. She also said that she was nervous, but at the same excited about hosting the show.

The show aims to strengthen the influence of K-pop around the world and will air in eight nations in Asia. This will be the first time that a music program will be hosted on the island of Jeju, a surprise move as most K-pop artists and broadcast studios are based in Seoul. Kim said that that Jeju was chosen as it is a popular destination for Koreans as well as Chinese and Japanese tourists.

After the press conference, Sunny made her way to the set of the program at the International Convention Center in Seogwipo, about 40 minutes away from the airport. At the show’s very first recording, IU, B.A.P, Sunny Hill, Jung Yup from Brown Eyed Soul, and Rainbow were performed.

The first episode will be broadcast on Feb. 29.