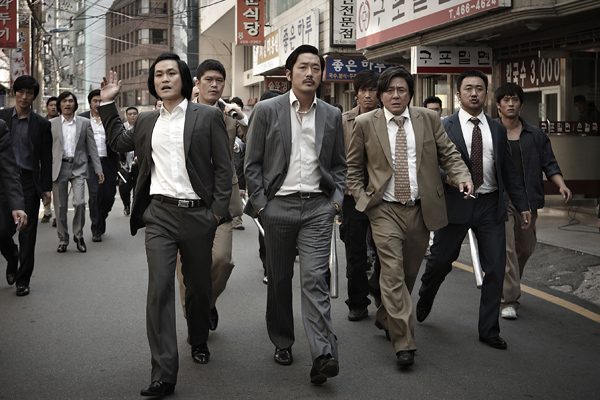 Actor Ha Jung-woo, second from left, plays a gangster boss, and Choi Min-sik, third from left, plays a customs officer who falls in with a gang in the film “Nameless Gangster: Rules of the Time,” which has topped the box office since its release earlier this month. Provided by Showbox Mediaplex

Corruption is the big issue at the box office these days as films highlighting serious issues and based on true stories gain traction.

Recent releases such as “The Crucible,” which exposes abuse in a school for deaf children, and “Unbowed,” a film about a professor who goes up against the judiciary when he is accused of shooting a judge with a crossbow, have won audiences over and sparked discussion about problems in society.

Following the trend is “Nameless Gangster: Rules of the Time,” which has topped box offices since its release Feb. 2, attracting 2.7 million viewers in 13 days.

Set in 1980’s and 90’s Korea when corruption and crime were so rampant that the government declared war against it in 1990, the film follows customs officer Choi Ik-Hyun (Choi Min-sik), who is on the verge of being laid off after having been charged with corruption. Weighed down by the anxiety of the situation, Choi exposes a methamphetamine operation and decides to smuggle the drug through Choi Hyeong-bae (Ha Jung-woo), a well-known gangster in Busan. 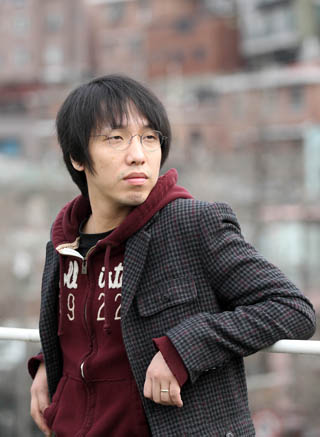 Corruption and abuse in the prosecution are also explored as prosecutors beat suspects and take bribes.

The film is directed by Yun Jong-bin, 33, who has previously addressed controversial issues in the critically acclaimed films “The Moonlight of Seoul,” about male hosts, and “The Unforgiven,” which sheds light on the absurdity of the Korean military - neither of which was a hit.

With this film, however, Yun has finally found a formula that works.

In addition, the film features two heavyweights of the cinema, Choi and Ha. Ha is a long-time friend of Yun and has appeared in almost all of the director’s films, including “The Moonlight of Seoul” and “The Unforgiven.”

Yet the film has also ruffled feathers. In a recent interview with the JoongAng Ilbo, Yun said he realized just how popular it had become when he received a call from the Supreme Prosecutor’s Office a couple of days ago.

The Prosecutor’s Office wanted to talk with Yun about the image of prosecutors from his point of view as an outsider, but Yun said he declined because the film is nothing but fiction.

Though the film does have a fictional plot, it was inspired by Yun’s father, who served as a high-ranking official in the National Police Agency before his retirement.

Here are excerpts from the interview with Yun.

Q. It seems like the Supreme Prosecutor’s Office is uncomfortable with this and other recent films because it contains a negative image of prosecutors. What do you think?

A. This film is different from “The Crucible” and “Unbowed,” which are true stories that reveal absurdities in society. I wanted to criticize the tendency toward the crowd mentality in Korea. Whether regional ties or school connections, people form groups that will benefit them. Choi Ik-hyun is a typical example of this mentality.

What made you examine the idea that everyone is a thief?

Everyone, no matter, where they’re in society, can be a thief, from the gangsters who cheat on ordinary people to the prosecutors who crack down on gangsters for political reasons.

Your father was a high-ranking official in the National Police Agency back in the 80s. How did that impact the story?

When my sister and I used to recall our childhood, we wondered how it was possible to spend the summer in decent summer houses on my father’s salary. We also received pocket money from his acquaintances. I also remember there were many phone calls asking my father for favors. Think about it. It must be worse for other high-ranking officials in the political arena and prosecution. All fathers did this to feed their families. And I think my generation should end the vicious cycle of corruption.

Why did you choose to address the issue at this point of time?

I can’t stand the way society is so driven by money. It seems like society is going backward. So I decided to look back on my father’s generation. I made “The Unforgiven” after I was discharged from the army and “The Moonlight of Seoul” came out when I was living in Gangnam [the affluent, southern part of Seoul]. I’m interested in how society is regressing.