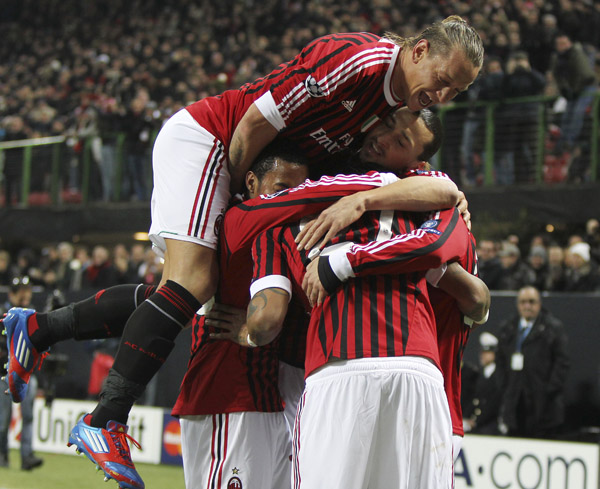 LONDON - The most highly anticipated matchup of the Champions League’s first knockout round was hardly even a contest.

AC Milan outclassed Arsenal on Wednesday to plant one foot firmly in the Champions League quarterfinals, beating the English club 4-0 in their last-16 first leg.

Zenit St. Petersburg secured a slimmer advantage by beating Benfica 3-2 at home earlier, but Milan produced the most convincing display of the knockout round so far as the meeting of two top teams turned into a rout.

Robinho scored twice at the San Siro after Kevin-Prince Boateng had given Milan the lead with an unstoppable volley, and Zlatan Ibrahimovic all but finished off the Gunners with a penalty in the 79th minute as the hosts repeatedly exposed Arsenal’s weakness in defense.

“We played very well as a team, we didn’t give them any goal-scoring chances. We deserved this night, this win. It’s the best game we’ve played this year.’’

The result puts the Italian club on the verge of its first quarterfinal appearance since it won the tournament in 2007, and goes some way toward erasing the memories of the team’s struggles against English teams in recent years.

It was eliminated by Premier League clubs at this stage of the Champions League in three of the past for years.

For Arsenal, it was another letdown in a season that has already seen it fall out of the Premier League title race and strugge to secure a spot in next season’s Champions League.

“We were never in the game,’’ Wenger said. “We were very poor offensively and defensively. It was shocking to see how we were beaten everywhere. It was our worst performance in Europe by far. Not once in the 90 minutes were we in the game.’’

It also provided a disappointing finish to Thierry Henry’s loan spell at Arsenal, as he played his last game before returning to the New York Red Bulls.

Henry came on as a second-half substitute but could do little to inspire a lackluster Arsenal, although his neat flick set up Robin van Persie for the visitors’ best chance in the 66th minute. Van Persie unleashed a shot that forced a stellar diving save from Christian Abbiati, who pushed the ball just wide.

By then, though, Milan had already decided the game.

Boateng, making his first start in a month after tearing a thigh muscle, put Milan ahead in the 15th minute after receiving a pass from Antonio Nocerino on the edge of the area.

The midfielder controlled the ball with his chest and then unleashed a fierce volley from a tight angle that sailed in via the crossbar past a stunned Arsenal goalkeeper Wojciech Szczesny.

Arsenal manager Arsene Wenger put on Henry for the ineffective Theo Walcott after the break to chase an away goal, only to see Robinho add the third just four minutes after the restart. AP