Chinese not only buy cosmetics - but help landlords

Chinese not only buy cosmetics - but help landlords 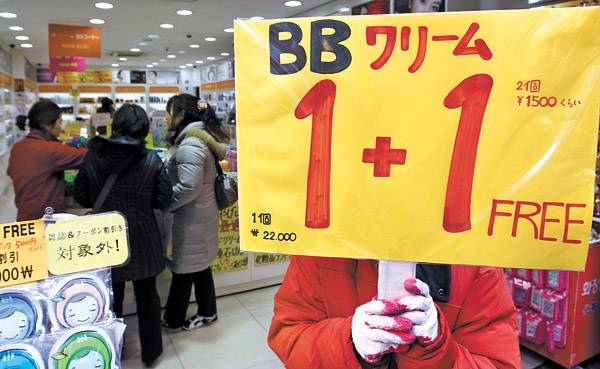 An employee at a cosmetics store in Myeong-dong, Seoul, where large numbers of foreign tourists head to shop, holds up a sign in Japanese. [YONHAP]

A boom of inbound tourism is giving Korea’s flagging real estate market something of a boost, a side-effect that is much appreciated by land and property owners in some once-flagging commercial districts of Seoul.

A number of shopping areas have been suffocating since 2008 as domestic consumers, especially students, draw their purse-strings ever-tighter due to the sluggish economy, leading stores to increasingly turn to foreign tourists as a new source of income.

Lee Kyung-ae, 61, who owns a small store in front of Ewha Womans University in western Seoul, raised her monthly rent from 2 million won ($1,770) to 2.4 million won recently as she saw the tenant’s business flourishing in tandem with growing numbers of Chinese shoppers.

“The area has become very lively as the Chinese are making up for the losses from college students, who have cut back on their spending due to the burden of higher tuition fees,” Lee said. 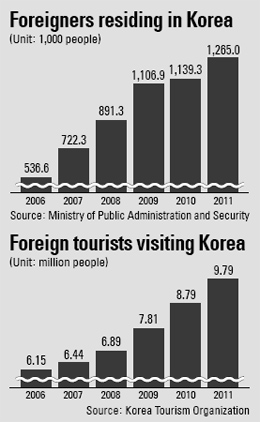 The clusters of businesses that surround the all-female university are mostly clothing and accessory shops whose main target have been young college and high school students.

The district was far from a typical tourist attraction.

But in the last couple of years it has become a common sight to see tourist buses filled with Chinese and southeast Asians parked near the stores, as this is considered a fashionable shopping area among young female tourists.

In recent years, the domestic real estate market has been crippled by a global recession that has cast a long shadow and led to declining sales in popular districts such as Yongsan, Namdaemun and Dongdaemun. Now foreigners are being seen as a form of life support for many stores situated there.

Market experts point to the growing global appeal of Korean popular culture, or Korean Wave, for attracting tourists from China, Japan and other parts of Asia, as well as Russia.

Almost 10 million foreigners visited Korea last year, while over 1.26 million expats called the country home at the end of December, according to the Ministry of Public Administration and Security and the Korea Tourism Organization. This is a significant increase considering that the combined number of tourists and expats stood at just 6.7 million five years earlier.

The trend is serving to drive up monthly rental prices in selected areas, with a 3.3 square meter property in Yongsan that went for around 55,500 won a year ago now costing almost 70,000 won, marking a rise of 24 percent.

Meanwhile, the average premium paid for a store of the same size in Hongdae, a bohemian neighborhood located near a cluster of universities in western Seoul, increased from 3.14 million won to 3.3 million won in two years.

A premium is different from a deposit or monthly rental fee in that a new tenant must pay it to the outgoing tenant for the right to do business on the property; it is also nonrefundable. The average price of premiums tends to rise in concert with the area’s popularity.

“Recently foreign tourists are expanding to more lively and youth-centered neighborhoods, such as Sinchon and Hongdae,” said Park Dae-won, who works at a commercial real estate information research center.

High-end golf resort businesses are also enjoying brisk membership purchases by Chinese customers. Almost 90 percent of the clients who purchased a membership at Arden Hill, a golf resort in Jeju, are Chinese.

“Chinese customers who want to enjoy their leisure time by playing golf in Korea are showing interest in the local leisure facilities,” said Kim Young-chun, chairman of Seohai Construction, which built Arden Hill.

In Seoul, stores and apartments at foreigner-friendly residential areas like Itaewon, Sangam-dong and Seongbuk-dong are also doing brisk business thanks to the rising tide of expats.

“The rooms are immediately leased the moment they are put on the market,” said Park Won-gap at Kookmin Bank’s real estate department. “The speed at which foreigners are renting houses way outpaces the rest of the real estate market, and it is likely to keep accelerating.”