Will Korea be iTunes’ second Asian base?

Will Korea be iTunes’ second Asian base? 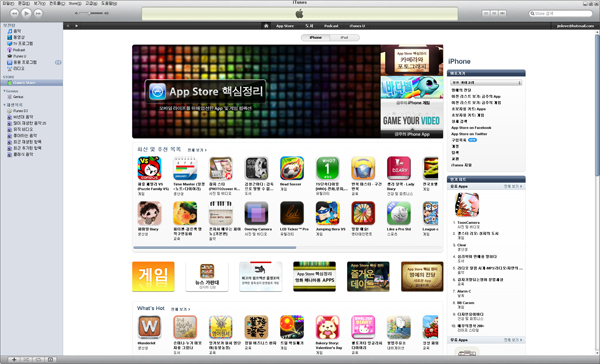 Apple may be bringing its iTunes Store, which has ranked as the No.1 music vendor in the U.S. since 2008, to Korea later this year, making it only the second market for the service in Asia.

An official at Apple Korea told the JoongAng Ilbo this week that the iPhone maker is now conducting a feasibility test on the Korean market.

“As Hallyu is making headlines and K-pop is gaining traction, officials are conducting a basic study [of the Korean market],” he said. “But it has always been Apple’s principle to make sure everything is perfect, so it’s hard to conclude exactly when iTunes will touch down.”

Apple launched the online digital media store almost a decade ago, leading Time magazine to dub it the “Coolest Invention of 2003.”

The current affairs magazine praised the California-based company “for finally finding a middle ground between the foot-dragging record labels and the free-for-all digital pirates and for creating a bandwagon onto which its competitors immediately jumped.”

The business scheme sees Apple sell songs in a digital format for less than $1 (1,131) so buyers can play them on its devices whenever and wherever they like.

The company’s share of the U.S. paid digital-download market was 66.2 percent as of the third quarter of 2010, according to market research firm NPD Group, dwarfing runner-up Amazon’s 13.3 percent market share.

On the heels of such success, iTunes has expanded into the U.K., France, Canada, Brazil and Australia, but as far as Asia is concerned, Apple has only introduced the service to Japan so far.

Korea’s digital music market is quite lucrative, as between 200 million and 300 million digital songs are downloaded every month.

Domestic online music stores like Melon and Mnet have expressed concern that when, or if, iTunes invades their turf, their respective pieces of the pie will get considerably smaller in light of the soaring popularity of Apple’s digital devices, such as its iPhones and iPads.

With that in mind, they are reportedly devising defense strategies, analyzing the shortcomings of iTunes and improving their services accordingly.

For instance, market leader Melon notes that iTunes is only available on the iPhone, iPad and iPod, which run on Apple’s iOS software platform.

So it has decided to focus more on rolling out apps that are optimized for Android devices.

In Korea, some 10.96 million people, or 70 percent of all smartphone users, opted for Android devices as of June last year.

Melon is also trying to get closer to the people, declaring this as the year it will focus on improving its customer service.

It has planned various events and promotions to this end, as well as increasing the availability of its free EBS (Educational Broadcasting System) lectures.

Others are hoping that iTunes’ rate of $0.99 a song will turn off Korean music fans. KT, Korea’s No.2 mobile service provider, which operates Olleh Music, effectively lowered its prices by allowing its mobile phone subscribers to use a mileage system when buying digital music.

“Apple’s iTunes charges at least $0.99 for a digital single, so we think this will give us some leverage,” said a KT official.

Olleh Music is also trying to get up close and personal with its users, suggesting songs they may like based on their previous preferences and improving its customer database in a bid to tune in more to their needs. 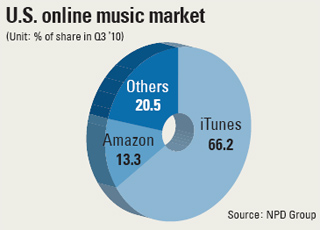 The pricing scheme is another area that iTunes may have to work on.

It adopts the so-called meter-rate system, in which people pay per song or per album, whereas domestic online music stores adopt a flat-rate system based on a monthly lump sum that usually works out a lot cheaper.

“Consumers are used to flat-rate packages, so we doubt whether iTunes will make much headway here with its meter-rate offerings,” said Bang Ji-yeon, an operations manager at Melon.

One example of this is how Loen Entertainment, the talent agency that represents IU, used Melon, which it also owns, to turn the singer into a star.

CJ E&M, which operates Mnet, is also responsible for the third season of “Superstar K,” a TV program that auditions would-be singers and churns out stars.

Another strength of Korean online music stores is their strong ties with talent agencies.

However, Apple’s possible entry is on the whole welcomed by music businesses here as they see this as a way of promoting their brands and raking in more profits.

For example, if a song sells on iTunes for $1.29 the developer takes 70 percent, or 1,021 won. But at Korean online music stores, developers often have to settle for between 30 won and 50 won a song.

“That is why advertising, concerts and royalties from abroad account for a large proportion of our profits. If iTunes enter Korea, such a situation could change somewhat.”

“At present, profits from digital music account for less than 10 percent of [Korean] developers’ total profits. We hope iTunes’ entry would bring changes to the local online music marketplace, which is based on the flat-rate system,” he said.

Advocates also argue that iTunes would help spread Hallyu as much of Korea’s pop cultural content is only readily available in countries like the U.S. and Japan.

A global platform like iTunes would raise the stakes considerably.

“Korea’s content developers have no reason to object to iTunes’ entry, as the current profit model here is full of limitations,” said one official at a local digital music business.