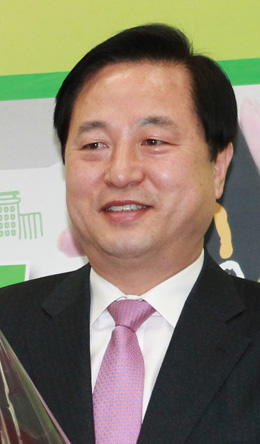 Kim, who broke away from the Democratic Party, the predecessor of the DUP, in 2008, said he returned to ensure the victory of the “democratic, progressive” side.

“As a member of the Democratic United Party, I will roll up my sleeves to help Korea’s party politics get back on its feet,” Kim said at a press conference at the National Assembly.

Kim was elected South Gyeongsang Governor in 2010 as an independent in the traditional stronghold of the ruling Saenuri Party. He served as minister of government and home affairs in the Roh Moo-hyun administration and is nicknamed “little Roh Moo-hyun” for his loyalty to the former president.

Kim said in order for the DUP to retake power, it should seek a larger merger of opposition parties.

The DP became the DUP after it merged last November with Innovation and Integration, a group comprised of Roh-loyalists and other independent liberal figures such as Kim and Seoul Mayor Park Won-soon.

“Kim’s joining is significant in that Busan and South Gyeongsang are strategic places for victory in the general election,” DUP Chairwoman Han Myeong-sook said. Both Busan and Gyeongsang are ruling party strongholds, but the liberals believe they have a chance to do well in those areas in the April elections.

With Kim’s joining, the DUP has secured eight mayors or governors, half of the heads of the country’s 16 large city and regional governments.

Seoul Mayor Park, who recently announced his plan to join the DUP, is expected to do so as early as next week.