A casino in the palm of your hand

A casino in the palm of your hand 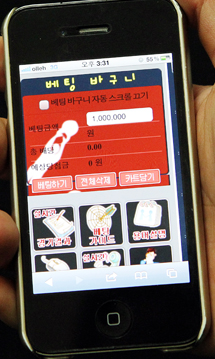 A 33-year-old worker surnamed Park enjoys illegal sports betting, sometimes two to three times a week, but no one around him knows about it.

He does it secretly on his smartphone.

On his commute or having drinks with his friends, he accesses a betting Web site and puts money down on football, basketball or baseball. He has lost millions of won but can’t stop betting because he believes one big jackpot will make it all up.

The number of illegal online sports betting sites have increased exponentially with the advancement and dissemination of smartphones. Sports Toto, the only licensed sports lottery in Korea, said that a total of 7,951 online illegal sports betting Web sites were found as of December 2010, up from only two to three dozen in 2007.

It estimated that about 15,000 illegal betting Web sites are now operating in the country. “It doesn’t matter where you are, it is like a casino in your hands if you have a smartphone,” an official at Sports Toto told the JoongAng Ilbo.

Park said he doesn’t enjoy playing poker or watching sports games on television at all, but started betting on sports online after hearing from a friend of his that he could win easy money. The first time he tried it, he bet 1 million won ($890) on his favorite football team to win an English Premier League regular season match and when they won he received 1.85 million won.

“I felt so electrified,” Park said. “I know that gambling is illegal but I think it doesn’t harm my life because I only play when I have extra money.”

Sports Toto said that there are two main reasons that lead people to choose illegal betting instead of the legal sports site.

He added that once someone creates an account at a Web site and exchanges money with cyber money, they are allowed to bet up to 3 million won per game. The legal limit being allowed for each game by Sports Toto is 100,000 won.

Sports Toto also said that those illegal Web sites offer many betting options. Sports Toto only allows people to put money on a few options - guessing the outcome for a selected game, or picking the player of the match or highest scorer, but the illegal sites allow people to put additional money on many situations.

In baseball for instance, gamblers can guess which team will allow the first base on balls, the first scoring team in a game and whether the clean-up hitter will hit an RBI when runners are in scoring position. A person can earn more than 60 million won from a single game if the right choices are made on every option with 1 million won of investment.

The dividends get wired within an hour after a game is over whereas the money transfer from Sports Toto takes two to three days. The Ministry of Culture, Sports and Tourism said on Wednesday that it will launch a large scale investigation against the illegal betting, but gamblers and business owners said it will be very hard to stamp out the illegal betting.

“I never worried about the crackdown,” Park said. “Though a Web site gets shut down, the managers of the Web sites immediately create a new one and inform me through text messages.”

As popularity grows, the amount of money available has also grown in the last few years, produced brokers and eventually led some active sports players to be a part of match-fixing schemes.

“Rumors that those brokers buy sports players in almost every professional sport including baseball were widely spread among illegal betting Web site owners,” 36-year-old Kim, a former gambling Web site owner told the JoongAng Ilbo. “It isn’t new information for those people who used to be in the business like me.”

Kim said that those illegal gambling Web sites began to appear after the legal Sports Toto was born in 2001 and the number reached its peak in 2009 and 2010 as rumors spread about owners of the Web sites making huge amounts of money.

Kim said that it became very popular for young people who are in their 20s and 30s as it only cost 3 to 5 million won to start the business and they are familiar with the Internet and smartphones.

“The match-fixing schemes are not going to disappear unless the legal Sports Toto is gone because it is the gateway to illegal betting,” Kim said.