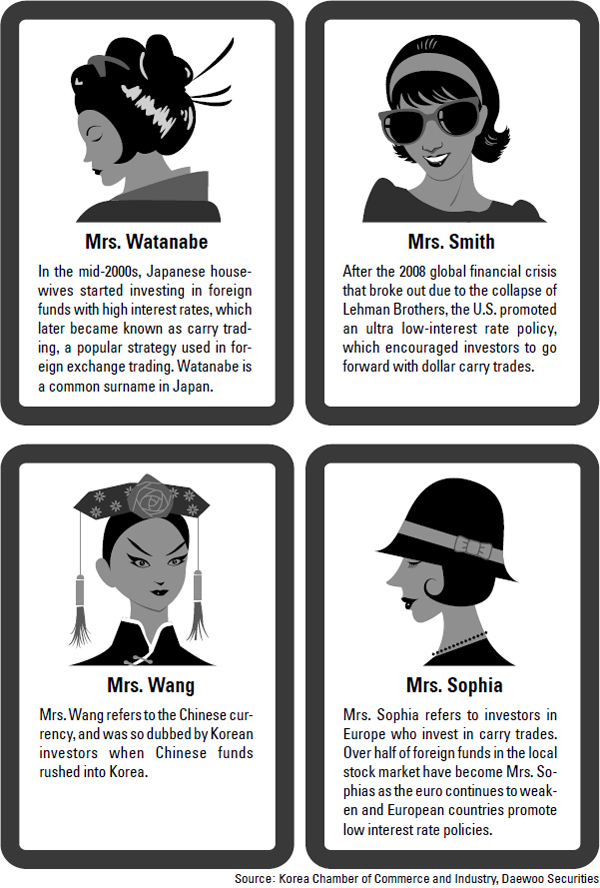 The Korean bourse is enjoying a blossoming romance with “Mrs. Sophia,” an industry term referring to the carry trade in currency markets, with recent data showing that traders are borrowing more euros at low interest rates to invest in local stocks.

This emerging trend in the financial sector led the benchmark Kospi to reach the 2,000 mark for the first time in six months in February. 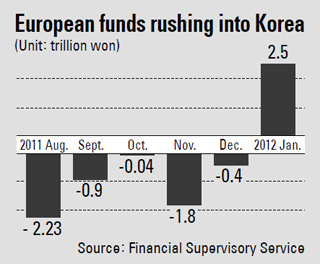 According to the Financial Supervisory Service, 4.7 trillion won ($4.2 billion) of European funds have poured into the country this year as of Monday. This is slightly more than half of Korea’s foreign investment, which stands at 8.8 trillion won this year.

In the mid-2000s, the local stock market saw strong Yen carry trades - which go by the moniker “Mrs. Watanabe” - but it switched its affections to “Mrs. Smith” (U.S. dollar carry trades) after the 2008 global financial crisis.

And from time to time, “Mrs. Wang,” or traders investing in the Korean market using the Chinese yuan, also showed her face. But for the most part, foreign investment in the domestic stock market has largely been driven by the greenback since the bourse opened its doors to overseas investors in 1998. Not anymore.

As of Monday, the volume of dollar-based investments stood at 2.4 trillion won, compared to 4.7 trillion won worth of European funds.

“Mrs. Sophia is helping the Korean stock market gain vibrancy, just as Mrs. Watanabe and Mrs. Smith did in the past,” said Kim Hak-gyun, an investor at Daewoo Securities. “European funds are adjusting their portfolios and eyeing the local market, which is still somewhat undervalued.”

The central bank lent 483 billion euros to European banks at a low interest rate of around 1 percent for three years. The decision was made to help the euro zone overcome its fiscal crisis and inject liquidity into the market.

European banks that have borrowed money from the BOK started investing in emerging countries with higher interest rates and stronger currency values, such as Korea.

According to Bloomberg, the global euro carry trade reaped an overall profit of 8 percent as of the end of January after investments in emerging nations began building up from last November. Comparable profits levels for the dollar stood at 1 percent, or a 0.3 percent loss for the yen.

Now debate is mounting over how long European investors will maintain their interest in Korea.

“The key interest rate for the three major developed economies of Japan (0.1 percent), the U.S. (0.25 percent) and Europe (1 percent) is shockingly low at the moment,” said Yang Kyung-shik at Hana Daetoo Securities.

“The difference with emerging nations like Brazil, India and Hungary is as much as 10 percent, so it is most likely that European investors will continue trading currencies [with emerging countries and cheaper markets] for higher profits.”

There is a potential downside, however. “As the euro zone has not recovered from its financial crisis, European funds may only remain in the local market for the short term,” said Park Joong-je at Korea Investment and Securities.