KEB to keep own management for next five years

KEB to keep own management for next five years 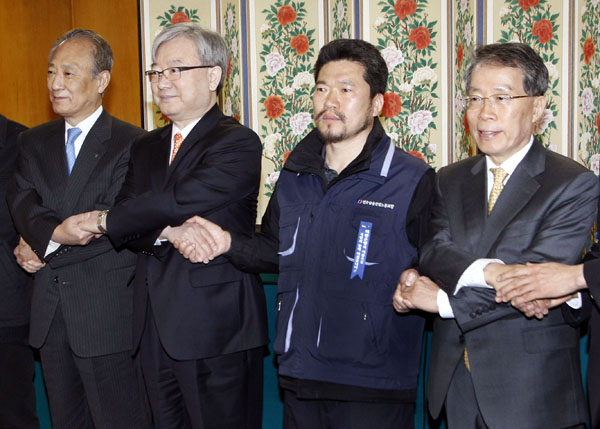 The deal comes after Hana, the country’s fourth-largest bank holding company, was given the green light from U.S. buyout fund Lone Star to purchase a controlling share of KEB in 2010, putting the final punctuation mark on a more than year-long acquisition.

Hana Financial, which has been expanding its financial territory through recent mergers and acquisitions, registered KEB, the country’s fifth-largest commercial bank, as its subsidiary on Jan. 27. It received the stake on Feb. 9.

Hana executives started negotiating with KEB’s labor union group on Feb. 6. The union demanded a number of terms before giving its official blessing - the flip side of which was the threat of a walk-out - including job security, no wage cuts, and independent management.

Union representatives said that if their terms were not met before today’s deadline, the group would go into full strike mode.

“We will maintain the two-bank system of Hana Bank and KEB,” Kim Seung-yu, chairman of Hana Financial, told reporters yesterday at the Korea Federation of Banks building in central Seoul, after the agreement was met.

“I’m well aware of the pain KEB employees have gone through in recent years, and I realized that if their demands were not met, it would be difficult to optimize the potential of the acquisition.”

KEB’s hard-line unionists unilaterally opposed the sale of the bank to Lone Star in 2003, and presented a similar level of obstruction to Hana Financial’s purchase.

“The agreement satisfactorily meets our demands,” said Kim Ki-chul, who heads the union. “We will not get in the way of the deal.”

According to Hana Financial, the agreement states that KEB will remain an independent entity and will keep its name for the next five years. It also contains a provision allowing for the two banks to hold negotiations after this period on a possible merger.

KEB’s new owner also gave an assurance that it will not interfere with labor-management relations, human resources or financial affairs. Furthermore, it promised to respect the bank’s independence in terms of appointing executives.

Hana Financial also agreed not to reduce or lay off KEB’s workforce and maintain its number of branches and wages.

Financial industry officials said the last-gasp deal was facilitated by Hana Financial Chairman Kim Seung-yu’s rich experience in M&As. During the Asian financial crisis in the late 1990s, he oversaw the acquisition of Chungcheong Bank in 1998 and Boram Bank the following year. On both occasions, Kim showed much patience with the banks’ labor unions and flexibility in trying to find common ground.