Themed gifts on sale as school’s in, or over

Themed gifts on sale as school’s in, or over 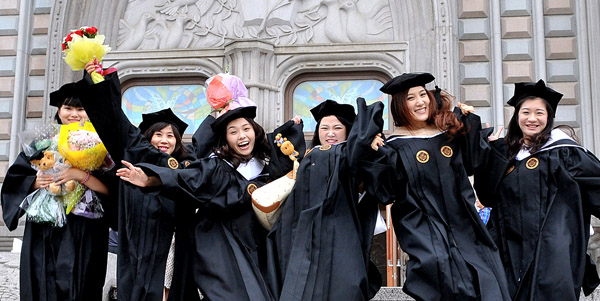 This photo shows college students jumping for joy on graduation day at Kyung Hee University in 2010. As Korean university students collect their diplomas at this time of year, retailers have begun selling graduation gifts at bargain prices. [NEWSIS]

With schools across the country entering graduation season and universities set to start the new school year at the end of this month, retailers have begun rolling out gifts targeting parents who wish to celebrate the start or end of a new chapter in their child’s life.

For high school and college graduates, LG Electronics recommends its 14.7 millimeter-thin Xnote Z330, an ultrabook that boots up in under 10 seconds and weighs just 1.21 kilograms (2.67 pounds).

On the other hand, Samsung thinks students will go for its MultiView MV800 digital camera, which features a 3-inch (7.6-centimeter) wide flip-out touch display for camera users to shoot and record images at all angles.

Meanwhile, E-Mart, Korea’s No.1 discount store chain, is selling Kipling school bags - a popular foreign brand among elementary and middle school students - at up to 40 percent off regular prices.

“We managed to drive down the prices of two Kipling backpacks because we imported them ourselves [rather than through an official importer],” said Kim Jin-ho, an official at E-Mart’s public relations department. The two bags are now selling for 79,000 won ($70) and 99,000 won.

For more high-end school bags, merchandisers at Lotte and Shinsegae department stores recommended Fila’s Bumblebee, a yellow bag that is flying off the shelves these days due to its resemblance to the eponymous robot in the “Transformers” movies. Shinsegae is offering it at the cheaper price of 138,000 won.

GMarket, Korea’s No.1 online retailer, has kicked off its “surprise bargain” sale by selling a limited number of laptops, electronic dictionaries and school supplies such as paper notebooks at discounts of up to 80 percent. The event runs through Feb. 26.

“As demand for digital gadgets and school supplies jumps with the start of a new school year, we have prepared promotional events offering some items at half price for consumers who want to grab high-quality goods at reasonable prices,” said Park Yu-kyung, an official at GMarket’s digital division.

For music lovers, Philips’ O’Neill “The Bend” headphones could be the answer. The colorful headphones, which come in four colors and are designed to endure extreme outdoor activities, were created in collaboration with sportswear brand O’Neill. They are made of pliable plastic that lets users stretch them out until they are flat.

Auction, the nation’s second-largest online retailer, is selling furniture targeting students, including bookshelves, desks and chairs up to 53 percent cheaper than the current market price until March 11.

“Along with electronic gadgets, this kind of furniture always proves a hot seller during graduation season, especially for young students who are entering elementary school,” said Yoo Moon-sook, an official at Auction’s furniture division.

Those who want to have a stroll through traditional Korean markets and sift through the stationery on offer are recommended to stop by Changsin-dong Toy and Stationery Wholesale Market in central Seoul.

Changsin is Korea’s largest toy and stationery market, selling products ranging from toys and stationery to party supplies at over 100 stores nationwide.

At the start of every new school semester, the market is teeming with shoppers hunting for high-quality stationery at prices 30 percent to 40 percent cheaper than at most retail stores.