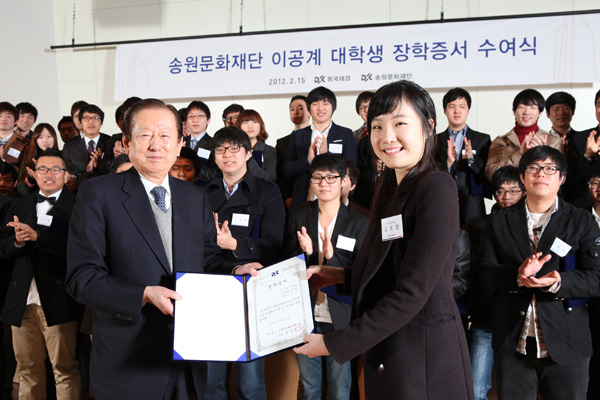 Choo Kyung-suk, chairman of Songwon Cultural Foundation, grants scholarships to college students on Wednesday at Ferrum Tower in central Seoul. The foundation founded by Dongkuk Steel in 1996 granted scholarships to a total of 2,630 students. Provided by the company

“From now on, I would like to use my property to return favors I received from society and the country,” reads a letter that Dongkuk Steel founder Chang Gyeong-ho wrote in 1975 to President Park Chung Hee.

In the letter, Chang stated his intention to donate his entire assets of 3 billion won ($2.6 million), which is now worth about 300 billion won. He passed away in September of the same year.

Before he wrote it, Chang notified his family of his intention. Chang at that time told his family members that his property didn’t belong to him and it must be returned to society. Chang’s will reflected his philosophy that “Property is like flowing water. Just as water goes bad when it lies stagnant, property decays if it stays in the same place.”

The Chang family’s spirit of giving back to society has been passed on for three generations. Chang Sang-tae, the second chairman of Dongkuk Steel, established the foundation in 1996 when he relocated a steel factory from Busan to Pohang.

Chang at that time expressed his intention to donate some of his company’s good fortune for residents in Busan, where the company ran a factory for 35 years. Chang donated some of the money he earned from selling the Busan factory land and that’s how the foundation was born, according to Dongkuk Steel.

The foundation centered on granting scholarship and other subsidies for research and development budget and buying textbooks for science and engineering students in need of help.

The foundation reflects one of Dongkuk Steel’s management philosophies, “we put a top priority on training and educating employees before producing goods and services at the highest level.”

Chang Sae-joo, the third chairman of Dongkuk Steel, increased financing of the Songwon Cultural Foundation to 34 billion won. A total of 2,630 elementary, middle and high school students have benefited from the scholarship since its foundation in 1996.

Each recipient gets 4 million won for an annual scholarship for up to two years, according to the company.

The company also gives support to the elderly living alone and neighbors in need by holding various events and activities.

The company still upholds the founder’s message on its official Web site: “I established this steel company not only for profit but also to contribute to the development of the national economy.”