Guiding youth, one cafe at a time

Guiding youth, one cafe at a time 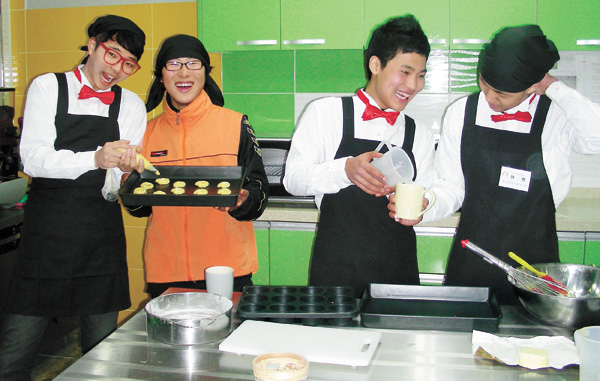 Noh Seong-tae, left, attends a cooking class with his co-workers at the Do Dream Cafe in Jeonju, North Jeolla. By Jang Dae-suk

JEONJU, North Jeolla - The Jeonju City government’s Do Dream project, which aims to guide juvenile delinquents back on the right path, has come to fruition.

The city government said that the project to turn juvenile delinquents into CEOs of small cafes was proposed by one of the adolescent counseling centers in Jeonju and is now in its operating phase.

Some 11 teenage students, many of whom were abandoned by their families, were selected as executives in charge of managing the Do Dream Cafe in Jeonju.

The city government said that the project was developed in order to provide better living conditions and develop more mature and ambitious individuals.

Noh Seong-tae, an 18-year-old student, was left in an orphanage in Seoul when he was born. In school, he got involved with gangs and bullied other students.

He was kicked out of school last year and ran away from the orphanage, wandering around the countryside for months. Noh said that he had worked in snack bars and construction sites in Jeonju, but was often fired without any payments.

“I really wanted to ask someone why I was abandoned every time bad things happened,” Noh told the JoongAng Ilbo, “What I did to distract myself from such thoughts was drink alcohol and torment weak students.”

One cold day in December, Noh met Yoon Su-nam, an adviser at the adolescent counseling center in Jeonju, when he was drinking on the streets after losing one of his part-time jobs.

Noh was taken to the center where Yoon suggested he participate in the center’s Do Dream project. About 10 other students were studying to become managers and learned skills like accounting and service etiquette.

“We invited professional baristas and cooks in order to teach them how to make coffee, sandwiches and cookies that will be lined up in the cafe,” Yoon told the JoonAng Ilbo.

“In the beginning, they sometimes refused to take the lessons, but after seeing the cafe being developed they began to take on responsibilities.”

Yoon said that the city government and center persuaded local banks and religious organizations to support the project.

Eventually, 50 million won ($44,500) was donated by Jeonbuk Bank and the Won-Buddhism foundation, which was spent on rent, supplies and decorations for the shop.

“I really want to show people that we can run the cafe successfully,” Noh said.

“I think about my future every day since I decided to work hard in the cafe. In the future I want to learn English and be a global CEO that runs the best coffee franchise in the world.”