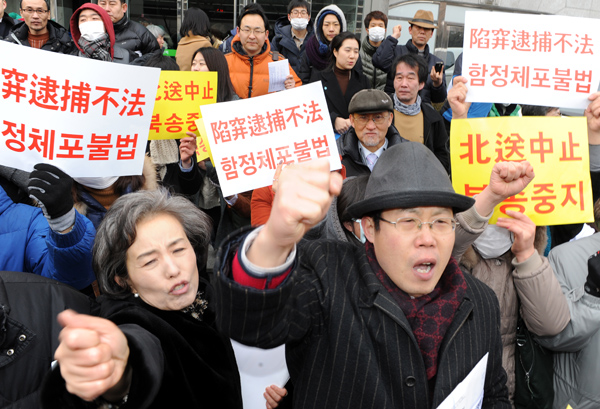 South Korean activists stage a rally in front of the Chinese Embassy in Seoul calling for China to not send North Korean refugees back to their home country, saying those refugees might be executed. The sign reads “ Protect Refugees.” [NEWSIS]

A South Korean lawmaker said yesterday that Chinese authorities were believed to be transferring a group of nine North Korean defectors to the border city of Tumen to repatriate them to their impoverished homeland.

Citing anonymous sources based in China, Park said Chinese authorities were transferring the nine defectors to the northern city of Tumen from where they also plan to repatriate 10 asylum seekers currently being held in Shenyang and five from Changchun.

Park also said a family of three North Koreans was captured by Chinese authorities in Longging on Feb. 13, amid an intensifying crackdown near the border.

South Korea’s Ministry of Foreign Affairs and Trade said it is verifying the number of North Koreans detained in China, but did not elaborate on details.

“There are rumors some of the North Korean defectors will be repatriated but China has not yet confirmed facts on the matter,” a Foreign Ministry official said.

Park said she has sent e-mail and faxes to ask for help from UN Secretary General Ban Ki-moon and Robert King, a special envoy for North Korean human rights issues, to prevent China returning the defectors to their homeland, where they face severe punishment.

“I will protest in front of the Chinese Embassy in Seoul next week and hold rallies every Wednesday from next week,” Park told the Yonhap News Agency.

China does not recognize North Korean refugees and sends them back to the North, where they face harsh punishments and even execution, according to defectors and activists.