Koo the only Korean in Europe to hit the net

Koo the only Korean in Europe to hit the net 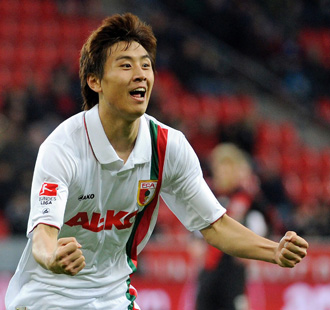 FC Ausburg midfielder Koo Ja-cheol, who is currently on loan from VfL Wolfsbrug, scored his first goal in the German Bundesliga on Saturday.

At the away game against Bayer Leverkusen at the BayArena, Koo scored Ausburg’s equalizer in the 50th minute to make the score 1-1. The 22-year-old curled the ball into the net with his right foot from just outside the penalty box after teammate Sascha Molders back heeled the ball across the box.

For Koo, it was his first goal since arriving in Gemany in January last year from Jeju United. The Korean played 22 matches for Wolfsburg, but couldn’t find the net. He was loaned to Ausburg last month for the remainder of the season.

Meanwhile, other Korean footballers in Europe had a tough time on Saturday.

Hamburg striker Son Heung-min featured in his team’s match against Werder Bremen as a second half substitute but didn’t manage to score as his club lost 3-1.

In England, Arsenal and Sunderland played each other in the FA Cup last 16 but neither Arsenal striker Park Chu-young or Sunderland forward Ji Dong-won made it on the pitch, with Park not even making the bench.

The match, at Sunderland’s Stadium of Light, ended with a 2-0 victory for the home side as goals from Kieran Richardson and an own goal from Alex Oxlade-Chamberlain helped the Black Cats advance to the next round.

The story was much the same in France as Jung Jo-gook, who is playing with French club AS Nancy after being loaned from AJ Auxerre, played just 20 minutes as second half substitute against Toulouse.

The 27-year-old striker didn’t manage to score and so his tally for the season stays at just two goals in 14 appearances.