The majority of musicians in the Seoul Philharmonic Orchestra are women.Provided by the orchestras

For those in the audience familiar with well-known European orchestras, it came as a surprise that the 10 musicians in the orchestra’s cello section were all women. In the violin section, which has nearly 40 members, just a few of the musicians were men. 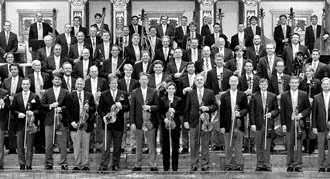 Most of the musicians in the Vienna Philharmonic are men.

According to a survey by the JoongAng Ilbo, Korean orchestras tend to have a very high percentage of female members, compared to famous orchestras in other countries. Of the 105 members of Seoul Philharmonic, women account for 65 members, or 62 percent. The ratio is even higher for the Bucheon Philharmonic Orchestra, where 63 of its 74 members are women, or 85 percent.

In contrast, the Vienna Philharmonic only has seven women, who represent 5 percent of its 136 members. And in the Berlin Philharmonic Orchestra, women account for 18 of its 128 members, or 14 percent.

The New York Philharmonic has a comparatively balanced gender ratio, with woman representing 45 of its 99 members.

In Japan, the NHK Symphony Orchestra has 17 women, or 16 percent of its 106 members.

Experts say the phenomenon in Korean orchestras where women outnumber men is related to fixed ideas about jobs and wages.

Chang Il-bum, a classical music critic and professor at Anyang University, said that Confucian ideas about gender roles have resulted in a higher number of men in administration, business and politics rather than the arts.

“The number of male students in music colleges is very low in Korea,” Chang said.

Last year, 58 out of 151 freshmen at Seoul National University’s music college were men, accounting for only 38.4 percent of the total. In addition, of the 29 freshmen who chose to major in string instruments, only seven were male. Yonsei University’s College of Music saw a similar trend, with 185 male students among its 598 students as of 2011.

One of the barriers to attracting men could be the low salaries offered by local orchestras.

“My annual salary after taxes is now 30 million won, and it was only 12 million won [$10,650] in my first year with this orchestra,” said a woman, 36, who asked to be identified only by her surname Lee. She has been working with the orchestra for more than 10 years.

“I do part-time jobs such as teach music lessons, but my income is still very low compared to that of my friends who are working at large companies,” she said.

Experts give mixed reviews to the sound of orchestras where women are in the majority.

Chang, the music critic and Anyang University professor, said that although it may not make a difference if the majority of musicians in an orchestra are women, “female musicians may create a more elaborate, detailed sound than men do.”

And Park Jong-ho, opera critic and chief executive of classic record seller and academy Pungwoldang, said, “It is no problem if women are in the majority. There is no gender in an orchestra.”

By Kang Ki-heon, No Jin-ho [estyle@joongang.co.kr]