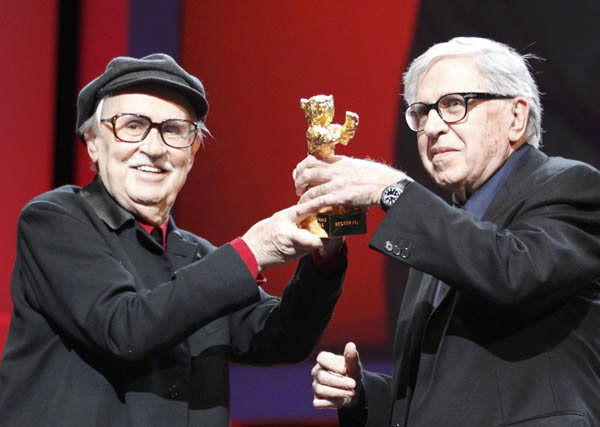 Directors Vittorio (left) and Paolo Taviani hold the Golden Bear award for the best film “Caesar Must Die” during the awards ceremony of the 62nd Berlinale International Film Festival in Berlin on Saturday.[REUTERS/YONHAP]

The documentary “Cesar Must Die” by directors Paolo Taviani and Vittorio Taviani received the Golden Bear award out of 18 contenders at what is the first of the year’s major European film festivals.

The Taviani brothers, both in their early 80s, thanked the international jury led by British director Mike Leigh and sent their greetings to the inmates of Rome’s Rebibbia prison who starred in the movie.

“I hope that someone, going home, after seeing ‘Cesar Must Die’ will think that even an inmate, on whose head is a terrible punishment, is, and remains, a man. And this thanks to the sublime words of Shakespeare,” Vittorio Taviani said.

The two filmmakers spent six months following the rehearsals for the play. The documentary does not dwell on the crimes the inmates have committed, but shows the actors immerse themselves in the play’s web of friendship and betrayal, power, dishonesty, and violence. But after the premiere, the cell doors slam shut behind Cesar, Brutus and the others, leaving them to return to their lives behind bars.

The festival’s runner-up Silver Bear went to Hungarian director Bence Fliegauf for “Just the Wind,” which focuses on the lives of a family of Roma as their community faces a series of deadly attacks.

The film features an amateur Roma, or Gypsies, cast and depicts the long-suffering, grimly silent mother Mari (Katalin Toldi), her elderly invalid father and two children who struggle to make ends meet and dream of emigrating one day to Canada - against the quietly menacing backdrop of a series of killings in their out-of-the-way neighborhood.

The film takes its cue from true-life murders that happened in 2008-9, though Fliegauf has stressed that it does not document those killings. Roma, who make up an estimated 5-8 percent of Hungary’s 10 million people, battle deep prejudice and have been deeply affected by the loss of guaranteed jobs after the end of communism.

The Silver Bear for best actor went to Mikkel Boe Folsgaard for his role in “Royal Affair,” and the award for the best actress went to Rachel Mwanza for her role as a Congolese child soldier in “War Witch.” AP