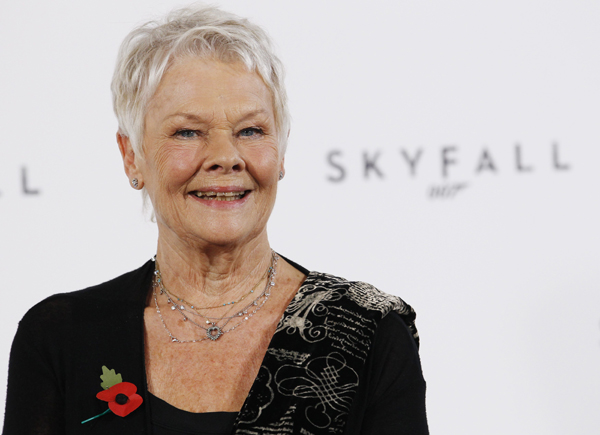 LONDON - Oscar-winning British actress Judi Dench has lost part of her eyesight and struggles to read film scripts or see people sitting directly in front of her.

The 77-year-old, who plays the spy chief M in the James Bond films, said she has developed an age-related condition called macular degeneration.

In an interview with Britain’s Daily Mirror newspaper on Saturday, Dench said it had affected her sight in both eyes, although she has received treatment that she hopes will prevent further damage.

“I can’t read scripts anymore because of the trouble with my eyes,” Dench was quoted as saying. “Somebody comes in and reads them to me, like telling me a story.

“It’s usually my daughter or my agent or a friend and actually I like that, because I sit there and imagine the story in my mind.

“I’ve got what my ma had, macular degeneration, which you get when you get old.”

Dench’s agent could not immediately be reached for comment.

Just under a third of Britons aged 75 or over have signs of macular degeneration, a painless condition that erodes central vision and leaves peripheral sight unaffected, according to Britain’s National Health Service.

There are two forms of the condition: “dry,” which leaves people with blurry central vision, and “wet,” a more serious type which can cause blindspots. It does not cause total blindness, according to the NHS website.

“I had wet in one eye and dry in the other and they had to do these injections and I think it’s arrested it. I hope so,” Dench told the Mirror newspaper.

“The most distressing thing is in a restaurant in the evening I can’t see the person I’m having dinner with.

“You get used to it. I’ve got lenses and glasses and things and very bright light helps. I can do a crossword if it’s bright sunshine, but if a cloud comes out the next minute I can’t see anything.”

Despite her eye problems, Dench said she had no plans to retire. Her seventh Bond film, “Skyfall,” is due to be released later this year, and she is currently promoting “The Best Exotic Marigold Hotel,” a comedy-drama set in India. Reuters