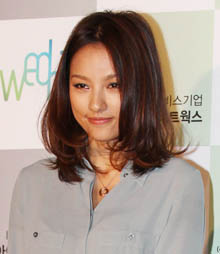 Singer Lee Hyo-ri revealed on Saturday that she has donated 120 million won to the Korean Society for Animal Freedom.
The money came from the sales of a 2012 calendar which features Lee and her adopted dog Soonshim. The calendar, which costs 12,000 won, was released last December to help promote animal adoption and animal rights.
“I really want to say thank you to everyone who purchased and supported the producing of this calendar. I’m so happy,” Lee wrote her on Twitter account on Saturday.
Lee is no stranger to donations. The 32-year-old has previously auctioned personal belongings and donated the profits to the Korean Animal Rights Advocates, where she is a member.The former member of Fin.K.L earlier this month donated 100 million won through the Beautiful Foundation to help senior citizens.
Lee is currently hosting SBS new music program “You & I” with Jung Jae-hyung, which will broadcast its first episode on Sunday.