Deja vu all over again at Korea’s savings banks

Deja vu all over again at Korea’s savings banks 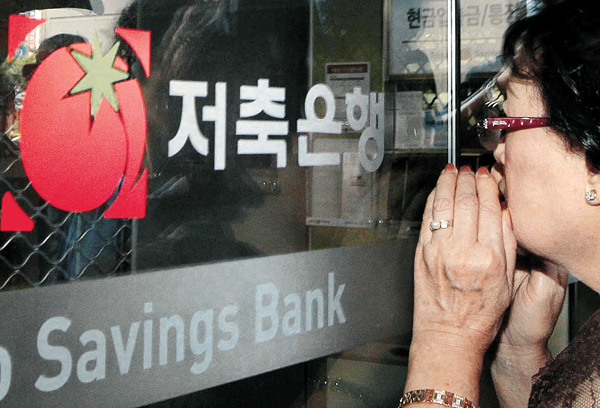 A worried depositor stares into the main branch of Tomato Savings Bank last September when the bank’s operations were suspended. Household loans by savings banks are rising, raising concerns about a return to the sloppy practices that triggered the suspension of 16 banks last year. [JoongAng Ilbo]


A 52-year-old man named Park recently got an unexpected phone call from a broker that arranges personal loans from savings banks.

At the end of last year, those banks had rejected Park’s application for 10 million won ($8,880) loan due to previous overdue loan payments, but the broker advised him to try again this month, saying that lending evaluations had become much more flexible. 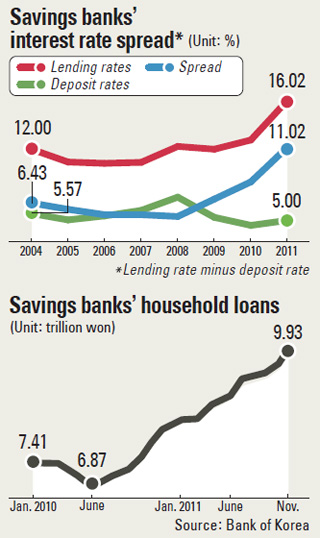 Park ended up considering a loan at an annual rate in the lower 30-percent range. “The interest is too high, but I cannot get loans from commercial banks or credit card companies,” Park said. “I have no choice but to turn to savings bank loans.”

Korea’s savings banks are aggressively expanding their personal loans as an alternate revenue stream from soured project financing (PF) loans. However, their financial positions remain as shaky as ever because of retail borrowers riddled with bad credit, the return of lax accounting standards that allowed creative use of doubtful debt reserves and outstanding PF loans.

Sought out as a replacement revenue source for real estate project financing loans, which had been the main focus of savings banks’ business starting in 2004 before they turned sour in the current property market slump, savings banks’ household loans are mostly used by people with bad credit ratings to which few lenders will extend money.

“The savings banks’ main customer pool consists of citizens with bad credit scores who aren’t even eligible for credit card loans,” said Lee Hyuk-joon, the chief analyst at NICE Investors Service, a credit rating agency. “Moreover, the suspension of operations by Rush N Cash and other nonbanking private lenders has served as a boost for the savings banks’ loan market.”

In order to cover the risk of expanding loans to bad credit holders, savings banks have drastically increased their lending rates.

At Solomon Savings Bank, the current industry No. 1 (by assets), about 46 percent of retail borrowers pay more than 30 percent per annum in interest rates, and 23 percent pay more than 35 percent.

Even local credit card loans, known for their quick and easy lending at high interest rates, only charge about 17 percent in annual interest.

Many customers are subject to dizzying lending rates at smaller savings banks. In the case of Yegaram Savings Bank and Woori FG Savings Bank, more than 90 percent of all borrowers are paying upwards of 35 percent annually in interest on their loans.

Meanwhile, savings banks’ deposit rates remains at a level lower than in 2004, at an average of about 5 percent in 2011. This wider spread between savings banks’ deposit and loan rates, which exceeded 10 percentage points last year for the first time since data were first collected, reached 11.02 points at the end of 2011, more than five times the spread at commercial banks.

“Savings banks keep on lowering deposit rates as there aren’t many dependable investment outlets even if they receive a lot of deposits,” said an official at a local credit rating agency.

Experts point out such lending practices can lead to more bad debt on savings banks’ books stemming from heavier debt burdens for people without means to pay. Out of all savings banks’ borrowers, nearly 12 percent were in arrears on their loans for more than 30 days during 2011, more than five times the rate for commercial bank borrowers.

“The fact that loan evaluations have gotten lax also means that the danger of defaults is also rising,” said Lee Si-yeon, a research fellow at the Korea Institute of Finance.

Meanwhile, signs point to savings banks returning to the lax accounting standards that compounded the breakdown of trust in savings banks during last year’s wave of suspensions.

Tracking the performance of 20 savings banks that submitted their July-December 2011 earnings reports to the Financial Supervisory Service last Wednesday, these savings banks reported 90.4 billion won in net profits for the July-September quarter, but reported net losses of 136.9 billion won for the entire half-year.

Such performances were due to savings banks marking “bad debt reserves,” or money set aside to cover uncollected debt, as assets on their balance sheets between July and Sept. 2011, during a lull in regulators’ investigations.

In an investigation into a few savings banks carried out by financial regulators in November, savings banks were found to have marked as profit the prices of asset sales that had not even been cemented yet, and even tweaked the default risk of their real estate loans to get back some of the money in its bad debt reserves as assets.

“Can you stretch and compress accounting standards as if they were taffy?” asked one senior regulatory official. “Savings banks are a financial business as well, but they still lack the necessary basic mindset.”

“Considering the portion of bad project financing loans that savings banks would have to buy back from Korea Asset Management Corporation [the bad-debt bank], some 17.5 trillion won in bad PF loans remain if calculated by 2010 data.”

Regulators are currently conducting additional investigations at four savings banks that were not suspended in September and plan to announce further suspensions, if any, sometime from May onward.