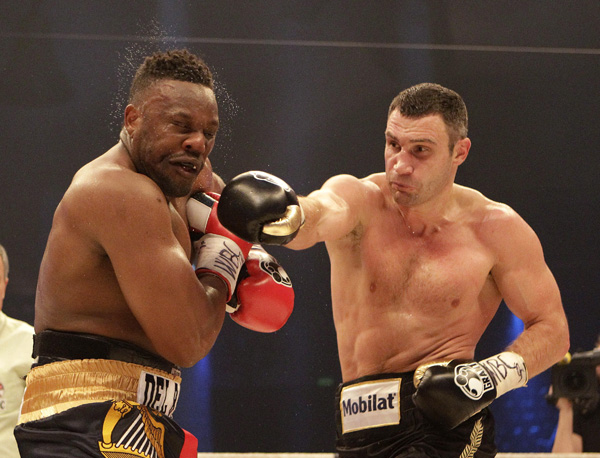 Chisora taunted Haye about losing the WBA belt to Klitschko’s younger brother Wladimir last July, leading to a heated exchange before Chisora knocked a bottle out of Haye’s hand and they came to blows.

Haye also fought with members of Chisora’s entourage, and his coach, Adam Booth, was left bleeding from a cut on his head.

Camera equipment went flying and reporters fled before security eventually managed to separate the men and police arrived at the scene.

The 40-year-old Klitschko beat Chisora in a bruising bout in which the Ukrainian claimed to have fought from the fourth round with only his right fist after hurting his left hand.

“I think we all heard excuses about a broken toe,” Chisora later retorted, referring to Haye’s defeat to Wladimir Klitschko in Germany last July.

Chisora found very little support from the sellout crowd of 12,500 after slapping Vitali Klitschko’s face at the weigh-in on Friday, and ensured the ill feelings continued when he spat water in Wladimir’s face as his brother’s record was being called out before their bout.

“I wanted to knock him out to be honest,” Vitali said. “Such a cheek.”

Wladimir acted as a buffer as Chisora continued to goad them.

Vitali was clearly incensed, but it took some time before he could assert control against the Briton’s aggressive approach. His greater reach and experience made the difference.

Chisora said after the bout he wanted a rematch, or a bout with Wladimir, who is now a WBA “super champion” and the holder of the IBF and minor WBO and IBO belts. The younger Klitschko is due to fight next against Jean-Marc Mormeck of France on March 3 in Duesseldorf, Germany.

Chisora was not hopeful of a rematch. “He won’t fight me again. I don’t blame you. I wouldn’t fight me either,” he said.

Klitschko improved his record to 44-2 (40 KOs) after what was arguably the toughest bout he’s had to endure since losing on a technical knockout to Lennox Lewis in 2003.

Chisora dropped to 15-3 (9 KOs) after his third defeat in his last four fights, but he had the fans in Munich’s Olympiahalle worried as Klitschko appeared to tire from his relentless attacks. Klitschko eventually took control of the bout in the ninth round and Chisora was barely hanging on in the 10th. Chisora gave it everything he had in the 12th and final round as he sought a knockout blow, but Klitschko, knowing the work was already done, used his greater experience to safely see out the round, and maintain the brothers’ dominance of the heavyweight division. AP