Busan in a bottle: City edition released by whiskey maker

Busan in a bottle: City edition released by whiskey maker 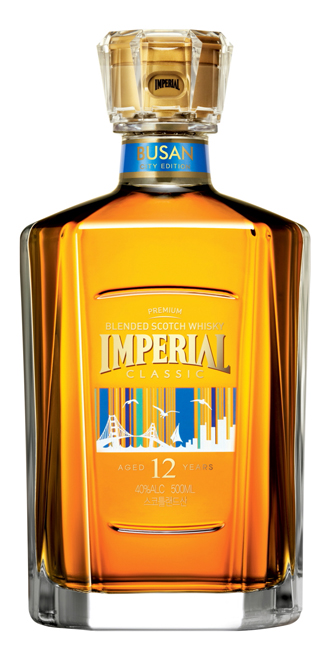 Pernod Ricard Korea yesterday launched a limited city edition of Imperial whiskey dedicated to Busan residents to boost its presence in that market.

The 12-year-old whiskey, Imperial Classic 12 City Edition Busan, comes in a 500-milliliter bottle and has images that symbolize the port city, including a seagull, sea wave, Gwangan Bridge and Haeundae Marine City.

The Busan edition will be only available in the region. Its ex-factory price is 24,915 won ($21.50), the same as normal Imperial whiskey.

This is the third city edition of Imperial whiskey the French liquor company has released here. A Pyeongchang version and one for Jeju were released in November 2011 and this January, respectively.

Prior to the launch of the Busan edition, Jean-Manuel Spriet, CEO of Pernod Ricard Korea, donated 100 million won on Friday to Busan Mayor Hur Nam-sik to help fund a bicycle-friendly park.