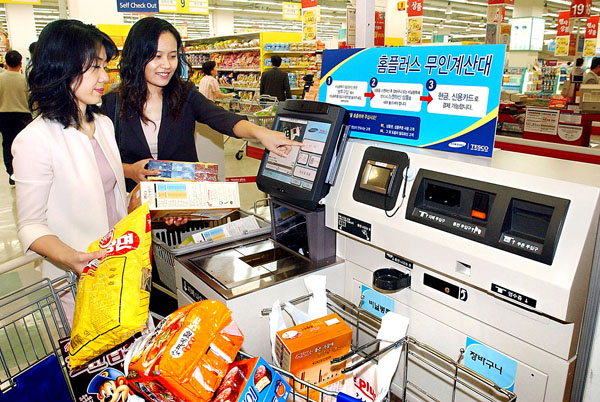 Homeplus has been operating self-service checkout stations in its stores since 2007 and now has more than 200 in 63 branches. [JoongAng Ilbo]

A recent divorcee, Choi goes shopping with her daughter at the nearby Homeplus in Jamsil, southeastern Seoul, and frequently uses the self checkout lanes. “Since I only purchase a handful of groceries and hate standing in long queues, I often check myself out,” she said. “It’s not only convenient and less time-consuming; I can earn more points on my Homeplus card.”

As retailers go self-service and laundromats increasingly compete with traditional laundry and dry cleaning shops, it is clear that the changes are being driven by changes in the structure of Korean families and society.

According to Statistics Korea, there were 4.2 million households here at the end of 2010 with exactly two family members. That accounts for 24 percent of the total number of households in the country.

There were 3.9 million households with four members, another 22 percent of the total; households with more than five people accounted for another 8 percent, or 1.39 million.

These demographics are in stark contrast with the situation a decade ago, when households of two amounted to 19 percent, while households of four accounted for more than 30 percent of all households.

The change is even more dramatic since 1980, when households of more than five members accounted for nearly half the total and only one in 10 households had two members.

“Among the increased number of two-person households in the past decades, those comprising a mother and child account for 19 percent, while those in which the only family members are a father and child total 7 percent,” said Yoon Hee-sook, an analyst at the Korea Development Institute. “This shows that households of single parents resulting from a divorce or separation have increased in recent years.”

In fact, statistics show that divorce in the country has been steadily rising while marriages have become fewer. These social changes are pushing retailers to adopt a self-service system in their stores.

Homeplus has been accommodating the changing family structure by increasing the number self check-out stations in its branches since 2007, after a trial run in 2005. It started at the retailer’s branch in Yeongdeungpo in southwestern Seoul, with four stations. Today, it has a total of 266 in 63 branches nationwide.

“The self check-out system has been gaining wide popularity among young people and members of small families,” said a Homeplus official.

Self-service is a fairly new concept in Korean businesses, and in the past was limited mostly to fast-food outlets.

Laundries are also joining in. Because most households owned their own washing machines, the laundry business had been a sideline for dry cleaners. But today, from a miniscule base, coin-operated laundries are beginning to pop up around housing complexes.

“It’s like many people’s preference for drinking bottled water over boiled water in terms of convenience and hygiene nowadays. Doing the laundry is part of that change in our lifestyle,” said Park Hyun-jung, the owner of Coin Wash 24’s Daechi-dong branch.

There are nearly a hundred self-laundry lounges across Korea, where people can bring a basketful of filthy clothes or large-size blankets to clean. The first of its kind under brand name Coin Wash 24 opened in 2002, in Myeongryun-dong, where Sungkyunkwan University is located and many students live alone.

“Our customers are mainly single men in their 30s and 40s who live alone and have not much time to do the laundry,” Park said. “There are foreigners living in this neighborhood to teach English at cram schools, so we expect them as well,” she said.

The washer charges customers 5,500 won ($4.90), while the dryer 4,500 won. It takes one hour at the longest to finish the cleaning and drying. Customers can go out for a meal or stay at the lounge for Internet surfing or watching TV.

“The self-laundry business is expected to grow in the future as people are becoming more concerned about hygiene,” Park said. “Such trend is also attributable to climate change turning Korea into a humid and high-temperature country.”

The gas station industry is witnessing a rapid growth in the self-service businesses largely because of the financial burden caused by rising oil prices.

Gyeonggi has the largest number of self-service gas stations at 168, followed by Busan with 90 and Seoul with 48.