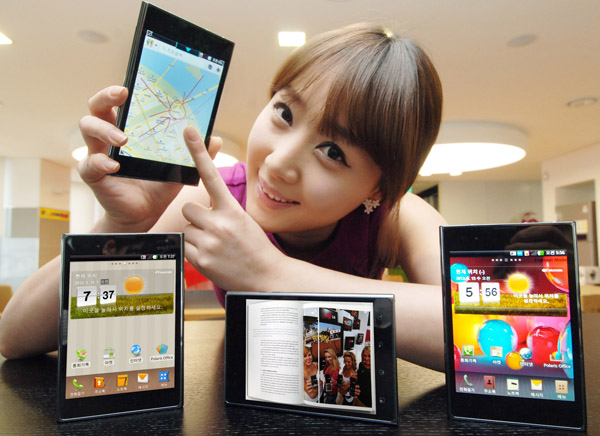 LG Electronics, the world’s No. 2 maker of smartphones running on the fourth-generation long-term evolution (LTE) network, announced yesterday that it would showcase its Optimus Vu device at the Mobile World Congress, the world’s largest exhibition for the mobile industry. The show dates in Barcelona, Spain, are Feb. 27 to March 1.

The company also showed the first photos of the Optimus Vu to the media yesterday; the device bears a great resemblance to its latest Prada smartphone with square corners, an ultrathin frame and a shiny, slim body.

The Optimus Vu, a cross between a smartphone and a tablet, is LG’s contender to challenge the Galaxy Note, Samsung Electronics’ device whose global sales surpassed one million in just two months since its release.

“Optimus Vu is LG’s strategic device that combines the company’s excellent display technology and advanced LTE technology and is based on our analysis of consumer behavior,” said Park Jong-seok, the head of LG’s mobile communications division. “With innovative LTE devices, we plan to strengthen our LTE portfolio.”

LG Electronics has been betting on LTE to turn around its handset business, which has underperformed compared with its rivals. Such efforts have borne some fruit: LG Electronics sold about 800,000 LTE phones in global markets in the final quarter of last year, trailing behind only Samsung and outperforming HTC, according to a report by Strategy Analytics last week.

So, how are the Optimus Vu and Galaxy Note the same and different?

They both feature a screen in the five-inch range; the Vu hits that mark, and the Note is 0.3 inches larger. They are both stylus-based and both use the speedy LTE data network.

One big difference is the screens’ aspect ratios. LG’s Optimus Vu sports a 4:3 ratio, like Apple’s iPad, making its screen and the device itself wider than the Galaxy Note. Most smartphones have either a 16:10 or 16:9 aspect ratio; Samsung’s device has a 16:10 ratio.

LG officials say their choice of ratio allows people to better enjoy content, such as when reading an e-book from the device. “It is the best possible picture ratio for human beings to view [something] in the palms of their hands,” an LG official said.

But tardiness could be a downside of the Vu. It lags the Galaxy Note not just in its release date but also in when its operating system will be upgraded to the latest Android version.

The Vu is scheduled to go on sale here in March, about four months after the Note hit the market. Also, LG officials say they will upgrade the initial operating system for the device, Android 2.3 Gingerbread, to the current 4.0 Ice Cream Sandwich by June. Users of the Note will get that upgrade in March.

Still, some market observers say the Vu has a chance because of its display. If it succeeds, it will give LG a boost out of its year-long struggles with lackluster smartphone sales.

“Display size and quality have emerged as deciding factors for smartphone buyers,” a market watcher said. “LG regained market confidence with the Optimus LTE, and it could further flourish if the Vu triggers a good response.”