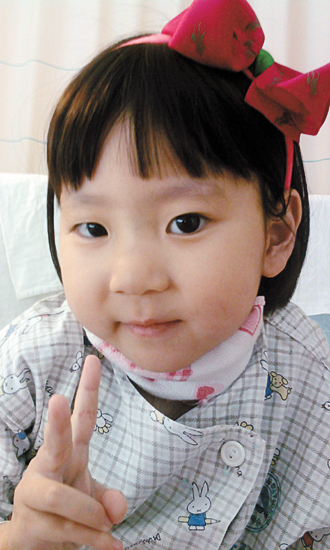 Six-year-old Cho Eun-seo, who is currently recovering from a transplant operation of seven organs late last year after suffering from chronic bowel obstruction all her life, would not have received the complete surgery she needed if her doctors had followed the law. Under the current law, it is illegal to transplant four of the organs the young girl received.

Cho, who hardly had any intestinal function, had to rely on injections to consume nutrients, but thanks to the surgery, she now can eat at least three spoonfuls of rice per meal.

However, under the current Organ Transplant Act, only nine body parts are legal for transplanting in Korea, including the liver, kidney, lung, small intestine, pancreas, bone marrow, eyeball and islets of Langerhans, which means that four of the transplants on Cho - stomach, large intestine, duodenum and spleen - were illegal.

According to Asan Medical Center, its team of medical doctors, led by Kim Dae-yeon, an associate professor at the Department of Pediatric Surgery, asked the Korean Network for Organ Sharing if the four problematic organs were allowed to be transplanted before performing the surgery on Cho, but they were told that “as the organs are not included in the law, it is not allowed.” The team, however, decided to ignore the reply and performed the surgery.

“On the day of the surgery for Cho, I was pressed for time as the success rate of an organ transplant from a brain-dead patient declines rapidly as time passes,” said Kim. “I was concerned that the surgery would be against the law but decided to break it anyway.” After the surgery, Kim’s team of medical doctors voiced the need for a revision of the law to allow a transplant of other organs that are not included in the current law.

When the country’s Organ Transplant Act was established in 1999, only seven body parts, including the liver, pancreas, kidney, heart, lung, bone marrow and eyeballs, were allowed, and two more - small intestine and the islets of Langerhans, about one to two percent of the pancreas that contains its hormone-producing cells - were added in 2007. Although the country’s organ transplant capabilities have developed over the years, the related law remained stationary.

“I believe organ transplants of the stomach and large intestines are technically possible in Korea, but the law blocks the procedure and makes medical doctors criminals,” said Lee Il-hak, a professor of the Department of Medical Law and Bioethics at the Yonsei University College of Medicine. “As organ transplant was the only method to save [Cho], it is not right to only think about the law.”

Kim Won-jong, an official at the Ministry of Health and Welfare said, “Other organ transplants that are not included in the current law are not allowed.”

However, the official explained that “as there’s no punishment specified upon violating the law related to organ transplant, it is difficult to say that Asan Medical Center went against the law.”