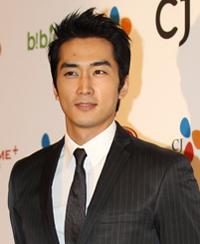 Hallyu star Song Seung-hun is returning to television after more than a year's absence.
The actor has been cast to play the lead in the drama "Time Slip Dr. Jin." Although it is not yet known which network will show the program, it is slated to air sometime in the first half of the year.
The drama will be Song's first since he starred in MBC's "My Princess" (2011) with actress Kim Tae-hee.
"Time Slip Dr. Jin" is based on a Japanese comic book set during the Edo period. The Korean adaptation will see the story set during the Joseon Dynasty.
In it, Song plays the title character, a time-traveling doctor from the 21st century. He will travel back to the Joseon Dynasty and treat patients using medical technologies of the future.
"As the original manga [comic] is Japanese, we have a lot of fans in Japan who are eagerly awaiting the drama," a representative from the upcoming drama said.
"Song is popular in Japan, so we expect the program to become a prominent piece leading the Hallyu revolution."