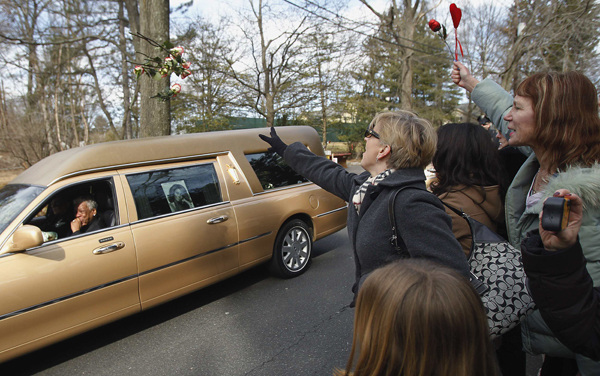 New York - Whitney Houston was laid to rest on Sunday in a private burial before family and close friends near her birthplace in Newark, New Jersey, more than a week after her sudden death shocked the world.

The pop star, whose powerful voice fueled her rise to fame in the mid-1980s with self-titled albums that made her a global pop star, died in a Beverly Hills hotel room last week. She was found underwater in a bathtub, but an exact cause of death has yet to be determined.

Dozens of fans lined the edge of street barriers as the procession carrying Houston’s body drove by under tight security from a funeral home in Newark, New Jersey to the Forest Lawn cemetery in nearby Westfield where Houston’s body was buried next to her father.

“It was emotional,” Teresa Giannetta, 35, who lives in Westfield and showed up with her daughter, Julia, 8, said after the hearse went by. Like many fans, Giannetta said she grew up listening to Houston’s music and likened the singer to “the voice of my childhood.”

Houston was laid to rest in her burial site after stars, family and friends mourned her in a spirited Baptist funeral service at her hometown church on Saturday. The New Hope Baptist Church in Newark was where Houston honed her range as a young singer with her mother Cissy Houston, a backup singer for Aretha Franklin.

She recorded stirring love songs and vibrant dance tunes during a 30-year career that peaked with her 1992 signature hit “I Will Always Love You” and paved the way for a generation of singers such as Mariah Carey.

But Houston suffered a turbulent personal life and volatile marriage to singer Bobby Brown, and she admitted to heavy use of cocaine, marijuana, alcohol and prescription pills. Officials have said prescription drugs were found in the hotel room where she died, but they have not yet linked her death to drug use.

“People judge her for the last few years. You cannot do that. She gave 30 years of her wonderful, beautiful voice and shared with us. And you have to love that. You have to respect that,” said Donna Wesolowki, 48, of New Jersey, who had watched Sunday’s procession. Reuters