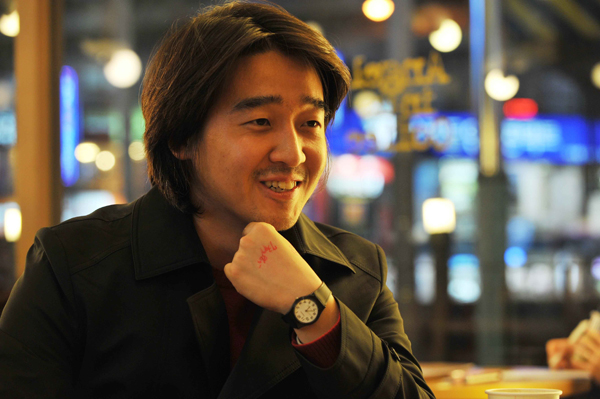 Yi Je-seok, widely known as Jeski overseas, is probably the most sought-after ad man in Korea. He has gained widespread acclaim for designs that reflect on social ills or poke fun at inequities.

Most recently, he received the ad man of the year award from the Seoul Advertising and Public Relations Club in December and was named an ambassador for the National Police Agency, an honor usually reserved for celebrities, last August. 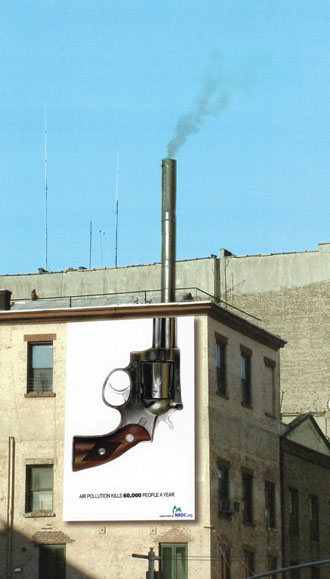 The ad campaign for the National Resources Defense Council, which aims to raise awareness about air pollution, brought creator Yi Je-seok the highest award from The One Show advertising awards in 2007. The text reads: “Air pollution kills 60,000 people a year.”

But Yi has said he started out a loser. After majoring in visual design and graduating with honors from Keimyung University in 2005, Yi was confident that he could land a job at a decent ad agency with his high GPA. But when he knocked on doors at local ad agencies, he couldn’t even get an interview. In order to build his resume, he applied for many local ad competitions but failed to win one. In his book, “Ad Genius Yi Je-seok” (2010), he says his misfortune may have been because he went to a college in Daegu and not in Seoul.

Eventually Yi stopped sending applications and opened a small printing company in his hometown of Daegu, where he mostly made banners and leaflets for local shops. Yi recalled in the book that he took pride in what he did until he was humiliated by a middle-aged man who worked for a competing shop. When the man criticized Yi’s creations, he decided he wanted to broaden his education in the United States.

After working for a time on a U.S. Army base to improve his English, the plucky young man was admitted to New York City’s School of Visual Arts (SVA) in 2006.

Though he told his long-time girlfriend that he would return soon, he said that at the time he regarded his home country as a “dirty society that only thinks highly of elites” and vowed that he “wouldn’t even pee in the direction of Korea.” He was a desperate young man full of venom and rage and it would be a long time before he could keep his promise.

About a year into his study at SVA, some of the rage dissipated and Yi began to distinguish himself. He won the Gold Award in the innovative marketing category, the highest award, from The One Show advertising awards in 2007 for an environmental awareness poster that depicted a smokestack as a gun firing towards the sky.

Jeski Social Campaign made this mural for the wall of the National Museum of Contemporary Art Korea while it was being renovated last year.

With the now-famous image, Yi became the first SVA student, as well as the first Korean, to receive the prestigious award. He also swept other prestigious ad awards including the Clios.

“Creating something new is almost like squeezing toothpaste. You need pressure if you want to get something,” Yi said during a recent phone interview with the Korea JoongAng Daily. He is currently living in New York, where he is pursuing a master of fine arts at the Yale University School of Art. “I think I was able to come up with works like that because I was angry and desperate.” 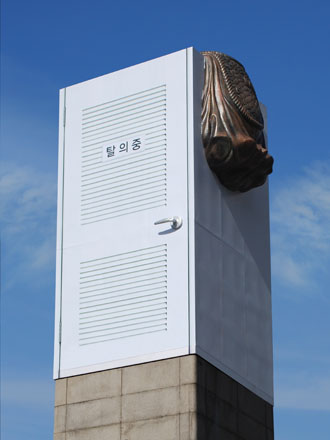 When the statue of Admiral Yi Sun-shin was temporarily relocated from Gwanghawmun, central Seoul, to Icheon, Gyeonggi, for repairs in 2010, Jeski Social Campaign filled the void with an installation of a fitting room with the sign “undressing” on the door.

After winning numerous awards, he had internships at four major ad agencies in New York including JWT, BBDO and Foote Cone & Belding - but he declined all of their job offers and returned home. He established another advertising company that he named Jeski Social Campaign in 2009, focusing on public ad campaigns rather than lucrative commercials.

The Korea JoongAng Daily talked to Yi over the phone and asked him about his rise to fame, the philosophy behind his work and his ultimate goals.

Q. What have you been up to?

A. I spend most of my time in the States these days [for study]. I often go to Korea for business but my coworkers are working on projects in Seoul. What I mostly do here is plan projects or add the final touches to existing projects.

You are sometimes called an “advertising genius.” Does that bother you?

I don’t think people really think of me as a genius. I got the nickname from the Korean media after I won the award [from The One Show]. I like it because most of the public is unaware of the advertising industry and it kind of narrows the distance between the public and people like me. 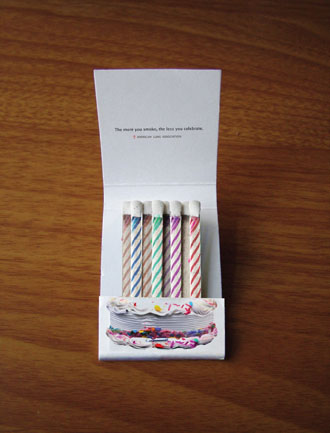 Yi created this image for an anti-smoking campaign when he was a student at SVA. The text reads: “The more you celebrate, the less you celebrate.” Provided by Jseki Social Campaign

You turned down offers from high-profile ad agencies in New York and decided to work on ads for social justice campaigns. Why was that?

My extreme experiences probably affected me as I was making that decision. I once stayed for a month in Africa and saw people who basically lived on grass. They were dying. Some traded their organs for a few coins. I’ve also stayed with people who live in the lap of luxury in New York. I experienced extremes and then I realized that life isn’t fair. I wouldn’t call myself an activist, but I made up my mind to work for people like myself, ones who are angry and disappointed. When you stay true to yourself, you have better outcomes. I want to make ad campaigns that can help needy people get out of poverty. Doing this makes me feel excited, instead of working for greedy people who think they can buy anything with money. I prefer to work with people who appreciate my work even if they can’t afford to pay me. We once had a client who paid us in eight USB flash drives and another who delivered us a pizza - but I was happy while working with them.

What made you start your own company?

I can’t make certain ad campaigns if I belong to a company that’s not mine because every company has to make a profit. For this reason, they do silly things because everything they do is focused on producing. I’m interested in things that other people are not.

The mission of Jeski Social Campaign is research and study, rather than making a profit. We sometimes work on commercial ad campaigns but we are very selective about what we do, which is very different from other ad agencies that almost beg for work.

My motto is that life is short and I don’t want to do crappy work. I consider corporate ethics and work philosophy when I receive orders. If they don’t think of ad campaigns as part of art or culture, I can’t work with them. Three commercial ad campaigns a year are enough to sustain the company.

You’ve shown many creative and witty works in Seoul over the years. For example, when the statue of Admiral Yi Sun-shin was relocated from Gwanghwamun to Icheon, Gyeonggi, for repair in 2010, you and your company filled the void left by the statue with an installation that replicated a fitting room with a sign that read “Undressing.” It was awe-inspiring and surprising that such a creative installation could replace the statue of an authority figure, especially because governmental organizations are still stiff and conservative in many ways. How do you view this kind of work?

You need intensive energy when you work with public officials but I do take pride in doing this type of work for governmental organizations. It’s not surprising at all to see creative ad campaigns from Nike and Coca Cola because they are private companies, but I think we’re changing the society bit by bit [though these ad campaigns]. If we want to see changes in society, we first need to change conservative public organizations.

[The installation was nominated for, but did not win, the 2011 New York Festivals International Advertising Awards. It was the first time a Korean government project had been nominated for an award.]

Looking back on your life, do you still think you were a loser in your early 20s?

I was at a disadvantage in many ways and I was full of anger and dissatisfaction. But those things later became a kind of motivation for me.

Do you have any tips for those who want to work in advertising?

Many Koreans tend to follow society’s rules and they have low self-esteem, maybe because of our educational system, I guess. I would advise people to spend a lot of time thinking about what they want.

I’m not interested in easy money. I’d rather work slowly and steadily. If you asked me to choose between money and fame, I would pick fame. I want to become the world’s best ad man. I also believe that people like me can change the world for the better because ad campaigns can change the way people think. Ad campaigns can’t make you taller but they can make you think that you’re not short. There are many things we can change just by changing our perspective and ad campaigns play a decisive role in doing that.

When typing your name into a search engine, one of the key phrases that comes up is “Yi Je-seok marriage,” meaning that many people must be interested in you whether you’re single or not. Did you keep your promise to propose to your long-time girlfriend?

Yes I did. We got married last July.

* Bachelor of Fine Arts from the School of Visual Arts, New York

* Bachelor of Fine Arts in visual design from Keimyung University

* Gold award from One Show in the college competition in 2007