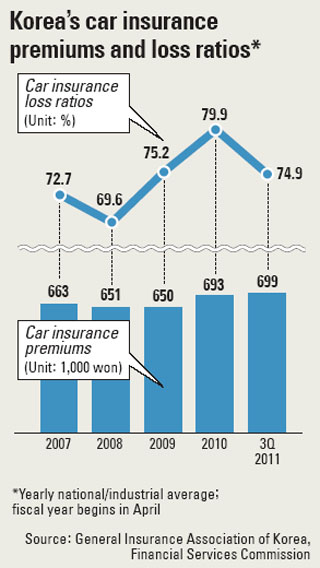 In a morning meeting with top Financial Services Commission officials yesterday, the agency’s chairman, Kim Seok-dong, said that “general insurers should take into account the fact that their losses have seen structural improvement due to the government’s regulatory reform.”

“[Companies] need to recognize that such a recovery in business conditions should segue into cuts in insurance premiums for the financial consumer,” Kim said. “I hope voluntary efforts [for lower premiums] emerge within the sector soon.”

Kim said car insurance should generate a “positive cycle,” where government measures improve the operational soundness of financial companies, which in turn “pass the benefit on to policyholders.”

This month, major insurers including Samsung Fire & Marine, Korea’s No. 1 general insurer by market share, were reportedly considering cutting their car insurance premiums for the first time in more than two years.

Only 1 million of the 18 million cars in Korea do not have insurance coverage. Considering that the average Korean citizen’s yearly premium was 699,000 won ($621) as of December 2011, according to the General Insurance Association of Korea, some 9.8 trillion won is paid annually.

However, industrywide cuts in the premiums have only materialized three times in the last decade - in 2001, 2002 and 2008.

Car insurance policies’ loss ratio, which measures how much insurers payout in claims from total premiums earned, rose to a yearly average of 79.9 percent in fiscal 2010, peaking in December of that year at 90.4 percent, according to the General Insurance Association of Korea. This means that for every 100 won earned, 90 won would be paid out for insurance claims. It also ranks as a far higher rate than the 70 percent that industry experts see as their break-even point.

But in fiscal 2011, insurers’ losses improved as the loss ratio fell to a three-quarter average of 74.9 percent, according to the FSC. Between April and December 2011, the entire industry’s car insurance business suffered losses of 320 billion won, down 75 percent the same period a year earlier.

Falling losses are compounded by the projection of record net profits in the general insurance sector, as total asset investment profits raked in by the 14 general insurers reached 2.35 trillion won between April and November 2011, dwarfing the losses they sustained from car insurance policies.

The FSC also helped by restructuring the sector in December 2010. But critics claim the latest proposal would damage smaller insurers that do not have large assets to offset the burden.