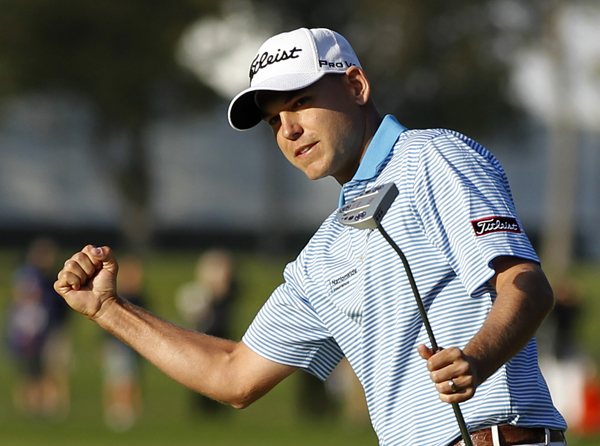 Bill Haas celebrates after making a birdie on the second playoff hole during the final round of the Northern Trust Open golf tournament at Riviera Country Club in Los Angeles, on Sunday. [REUTERS/YONHAP]

“I never expected to make a 40-footer, and especially in that situation,” a beaming Haas told reporters after clinching the winner’s check for nearly $1.2 million.

“That was a little bit of luck involved, but I felt like I put a good roll on it. It was meant to be, I guess.”

Mickelson, seeking a second consecutive PGA Tour win, missed his birdie chance from the back right bunker while Bradley’s attempt, a 15-foot putt from the fringe, slipped past the right edge of the cup.

Bradley, winner of last year’s PGA Championship, had set up his birdie opportunity by splashing out of the front right greenside bunker, a shot he described as his best all week.

“I couldn’t have hit a better shot,” said Bradley. “I had about a 15 percent chance of keeping that on grass where I could putt it. It was one of the best shots I’ve ever hit.

“But Bill Haas, you’ve got to give him a lot of credit. It’s good to see a fellow belly putter make a putt like that. I’m happy for him.”

The trio had finished the 72 regulation holes on seven-under 277, Haas closing with a two-under 69 while Mickelson and Bradley each birdied the par-4 last for matching 71s, Mickelson holing a 26-footer and Bradley following suit with a 13-footer.

Joint pacesetter overnight with Bradley, Mickelson began the final round by matching his playing partner with a one-putt birdie at the par-5 first to remain in a two-way tie at the top.

However, Bradley bogeyed the second and fourth to slide backwards before Mickelson sank a 4-foot putt to birdie the fifth and move two strokes clear of the pack at nine-under.

On a difficult day for scoring with Riviera’s notorious greens running firm, Mickelson then stumbled with bogeys at the eighth, where he missed the green to the left with his approach, and the ninth, where he found a bunker off the tee.

That put him a shot behind Haas, who had birdied the 10th to lead by one.

Haas, last year’s FedExCup champion, dropped back with consecutive bogeys from the 12th before Mickelson and Bradley regained a two-way share of the lead at eight-under when they birdied the par-5 11th.

Though Bradley faltered with a bogey at the 13th where he missed the green to the left with his approach, Mickelson joined him at seven-under after a three-putt bogey at the 14th.

Haas responded with a two-putt birdie at the par-5 17th and moments later found himself with the outright lead after Bradley and Mickelson each bogeyed the difficult par-4 15th.

However, Bradley and Mickelson, playing together in the final grouping, then sank their birdie putts on the 18th green amid thunderous cheers from the crowd to take the tournament into a playoff. Reuters