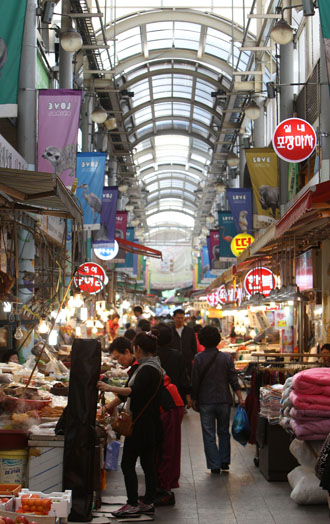 Despite the cold weather, Mangwon Market in Mapo district was brimming with customers last weekend, a refreshing turnaround from when it stood as one of the most neglected traditional markets in the capital.

Local merchants said the market has become popular again in the last couple of years as the introduction of special discount coupons has plugged the hole created by nearby residents, who chose instead to shop at large discount stores and supermarkets.

“The market is slowly coming back to life,” said a middle-aged vegetable store owner. “The special gift certificates [issued by the government] are helping traditional markets win back visitors.”

The so-called “onnuri gift certificates” that were first released in 2009 are slowly revitalizing traditional markets in Korea. 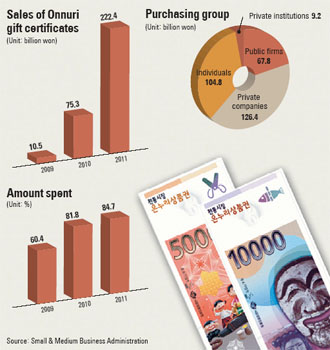 The 5,000 won ($4.45) and 10,000 won coupons are printed by the Small and Medium Business Administration (SMBA) and the Agency for Traditional Market Administration, and are aimed at boosting the country’s real economy by vitalizing traditional markets and spending.

Currently, a total of 1,023 traditional stores accept the certificates, which can be purchased at nine government-owned and private banks including the Industrial Bank of Korea and Korea Post. The word “onnuri” connotes a “pleasant and warm world for all.”

As of last year, 84.7 percent of the total purchased coupons had been spent.

According to the administration, the biggest buyers are large conglomerates. Hyundai Motor Group, the country’s second-largest chaebol, has purchased 6.7 billion won worth for its employees as part of its corporate welfare program, while steelmaker Posco has purchased 5.2 billion won and Samsung 5 billion won.

“During national holidays like Lunar New Year and Chuseok [Korean Thanksgiving], I used to receive onnuri gift certificates, and they are pretty useful,” said a former Samsung employee. “My wife and I didn’t used to go to traditional markets because they can be inconvenient compared to large discount stores, for example with parking, but the certificates have encouraged us to go there to buy our groceries.”

The move to issue the coupons comes as corporate-owned discount stores have increasingly been invading local neighborhoods in the last decade, threatening the livelihoods of mom and pop stores there.

According to the SMBA, some 178 traditional markets disappeared from 2003 to 2010, causing the total number in the country to fall to 1,517. In contrast, the number of hypermarkets run by large conglomerates, such as Lotte and Homeplus, jumped from 234 to 928 over the same period, while large discount stores almost doubled from 265 to 450.

Recently, however, the government has been beefing up its efforts to improve such facilities by lowering credit card commission rates for private merchants - an incentive for small traders to accept them - and providing grants to build more parking lots.

The SMBA said last month it will invest 319.1 billion won this year to support 330 large traditional markets across the nation and equip them with more modern facilities.

The budget will also be spent on educating private merchants on how to stay competitive with corporate-owned retailers, such as by offering tips on store management and promotions.

The administration said the number of stores that accept the gift certificates will be increased from 1,023 to 1,283 by this year, and that three more banks will sell them.

With such efforts, the SMBA expects the total volume of onnuri gift certificate sales to hit 500 billion won by the end of this year, up from 308.2 billion won at the end of last December.

However, private merchants remain concerned that the measure will not do enough to ward off the threat posed by large supermarkets.

“It will be difficult for us to get sales back to where they were in the 1980s and 1990s,” said another merchant in Mangwon Market. “The playing field is not fair.”