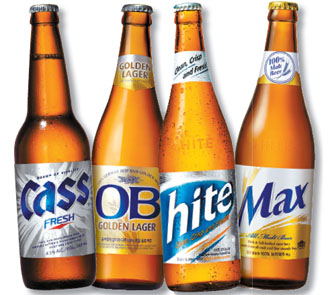 Dubbed “the beer of beer lovers” here, Hite-Jinro Group’s eponymous Hite was the top choice for middle-aged salary men in the mid-1990s, whose love of hops drew them to its smooth texture.

Released in 1993 and promoted as a pure, clean beer made of natural rock-bed water, it replaced OB as the market leader three years later and stayed on its lofty perch until last year.

But Hite-Jinro’s apparently unshakable dominance is crumbling as the same company that makes OB, Oriental Brewery, saw its Cass brand clinch the No. 1 spot last year.

According to a statistics released by the Korea Alcohol & Liquor Industry Association on Sunday, Korea’s second-largest brewer beat Hite-Jinro for the first time in 15 years last year by securing a 50.5 percent market share. Its longtime rival claimed the remaining 49.5 percent.

Market watchers say this is a giant leap for Oriental Brewery given that it was 16 percentage points behind Hite-Jinro as recently as 2008.

The change in fortunes was attributed to Oriental Brewery having released new products with various flavors that appeal to a younger generation of beer drinkers.

“I choose Cass over Hite not just because of its fizzy taste,” said Jeong Woo-jin, a 25-year old company worker. “I like the innovative marketing strategy used to promote Cass, which grabs the attention of young drinkers like myself who have been looking for something different.”

Cass comes in four different flavors, including lemon, and even has a low-calorie version.

“It’s interesting when you look at how Oriental Brewery managed to reclaim its No.1 position after 15 years,” said an industry source who asked not to be named. “The company acquired the Cass brand from Jinro-Coors, which was suffering from financial difficulties, in 1999 and built the brand up. In other words, an adoptee taken over from an enemy has become a cash cow.”

OB Golden Lager, which was released last March, also helped Oriental Brewery rise to the top as younger Koreans were drawn to its rich German hops, which gives it a taste that tries to emulate trendy foreign beers.

The company’s success story resembles that of Japan’s Asahi Breweries, which climbed up the ranks by pursuing innovation. In 2001, Asahi edged out Kirin Brewery after the latter had controlled the market for almost half a century since 1954.

But the latter brought out its secret weapon - Asahi Super Dry - in 1987, and Japanese drinkers fell in love with the sharper and more refreshing beer with less of an aftertaste, causing the gap between the two breweries to shrink and then disappear.

Asahi remains the top beer maker in Japan with a controlling 37.9 percent stake last year, ahead of Kirin’s 36.2 percent, according to Bloomberg.

But OB officials said it is too early to say that OB has vanquished its rival as Hite-Jinro Group was only formed last year, when Hite Brewery merged with Jinro, which produces soju, or Korean distilled liquor. This means the new entity is still finding its feet as it continues to integrate, they said.

“Hite-Jinro will be able to entirely focus on ramping up sales now as it finished integrating the two businesses last year,” said an official at Oriental Brewery. “This year we will see the real battle.”

However, some critics said OB is deliberately downplaying its recent success as it took flak from the public last year for its attempts to raise beer prices, citing the rising cost of raw materials.

“The company is not 100 percent happy about last year’s sales result because it wants to raise its beer prices [even further],” said another industry source.

Meanwhile, Hite-Jinro feels threatened by the changing state of affairs and the announcement in January that Lotte Chilsung is also entering the beer business.

In response, the company has developed 60 new beers and it is set to release some of them in the first half of this year, a senior official at the group was quoted as saying by the local press last Wednesday.

“Hite has centered its efforts on a purely sales-centric marketing strategies, but from this year, we will concentrate on enhancing our brand image and even the quality of our beer,” said Shin Eun-ju, a senior marketing official at the group.