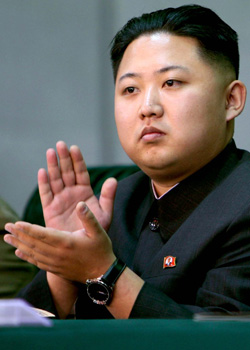 North Korea’s politburo determined to convene a rare meeting of representatives of the Workers’ Party in mid-April, 19 months after the latest one in 2010 when heir Kim Jong-un made his first appearance at an official event.

Eyes are on whether the successor, in his late 20s, will be anointed to the secretary-general of the party, the highest political position in the regime that has remained vacant since the death of leader Kim Jong-il.

The official state media Korean Central News Agency reported yesterday that the Political Bureau of the Central Committee of the Workers’ Party will hold the meeting “to finalize the great achievement based on juche (self-reliance) ideology and songun (military-first) revolution, by strongly gathering around comrade Kim Jong-un and to highlight the immortal achievement and revolutionary life of comrade Kim Jong-il for thousands of generations.”

The last meeting of the party’s delegates was held on Sept. 28, 2010, when Kim Jong-un was promoted to a four-star-general and vice-chairman of the powerful National Defense Commission, top decision-making body of the regime.

A group of high-ranking officials were also promoted at the time and now they have become the inner-circle power behind the untested heir, in order to apparently smoothen the succession procedure in preparation for the post-Kim Jong-il era.

There are three positions that the young, inexperienced successor Jong-un might be appointed to - the secretary-general of the party, a permanent member of the Central Committee’s Political Bureau, and the chairman of the Central Military Commission of the party.

“The last meeting in 2010 was the first one in 44 years. It introduced Kim Jong-un to people as a successor while Jong-il was still alive,” Yun Duk-min, a professor at the state-run Institute of Foreign Affairs and National Security told the Korea JoongAng Daily.

“The two main themes at the meeting would be Kim Jong-un’s promotion to secretary-general and whether he would reshuffle the current political arena, by selecting new figures or by keeping his father’s people.”

“North Korea is attempting to express its strong will to complete the succession work speedily through the meeting, not dragging it out as it did after founder Kim Il Sung died in 1994,” Cheong Seong-chang, senior fellow at the Sejong Institute, told the Korea JoongAng Daily. “At the time, then-heir Kim Jong-il had three years until he was anointed to the secretary-general of the party.”

However, Cheong said that the powerful National Defense Commission will be highly likely to be abolished, because it is an organization created by Kim Jong-il, who abolished the title Jusok (chief of state) to honor founder Kim Il Sung as the only person who took the title.

Instead, Jong-il created the NCD body and appointed himself as chairman.