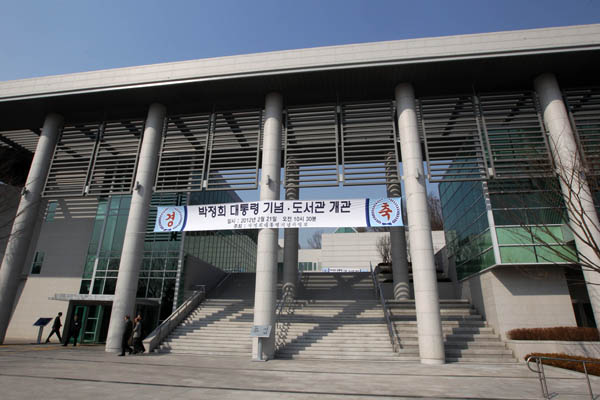 A banner celebrating the opening of the Park Chung Hee Memorial-Library hangs on the facility yesterday. The 12-year project that aimed to commemorate the former president was bogged down with political and financial problems, but was eventually completed in November and had its official opening today. By Ahn Seong-sik

A memorial hall to commemorate former President Park Chung Hee opens today after 12 years of political and financial setbacks. The Park Chung Hee Memorial-Library will be in a three-story building on 5,260 square meters (1.29 acres) in Sangam-dong, northwestern Seoul.

According to the Park Chung Hee Memorial Association, the library will exhibit the former president’s achievements and historical records and is expected to help young Koreans understand the country’s modern history.

“We’re happy to see a memorial-library that commemorates the president’s year-to-year history,” an official of the association said. “But we feel something is missing when we see the facility because we expected a better one, especially when we think about all of the president’s contributions to Korea.”

The memorial-library was originally designed only as a memorial to the former president, but eventually ended up as a memorial and a library that only uses 45 percent of the area.

“There’s definitely something wrong,” a historian who asked to remain anonymous told the Korea JoongAng Daily. “I can’t understand why Park’s memorial hall only takes up a tiny space. He was one of the greatest presidents in Korea who boosted the economy in the 1960s and 1970s. I understand that there are many different perspectives on him, but this is a separate issue. Koreans should able to evaluate Park based on the history he made, not from opinions or theories provided by politicians or civic organizations.”

When a recent survey, operated by Korean media outlet Hankyung.com, asked Koreans to choose the country’s most respected president, about 69 percent of respondents, or 6,089 people of 8,812, chose Park as the best president in the country’s history. They said that Park was the best leader and made the largest contribution to the country’s modernization and economic growth.


In 1997, the plan to establish the Park Chung Hee Memorial-Library was proposed by presidential candidate Kim Dae-jung, who later became the country’s 15th president in 1998, as an electoral pledge that offered “reconciliation with history.”

President Park’s right-hand man, Lee Hu-rak, had allegedly ordered the Korea Central Intelligence Agency, the predecessor to the National Intelligence Service, to kidnap Kim Dae-jung, who was a dissident leader and a strong critic of Park’s long-term hold on power between the 1960s and 1970s.

Kim was kidnapped on Aug. 8, 1973, from a hotel in Tokyo and was released in Seoul five days later.

The projected budget for the project was initially 70 billion won, with 20 billion covered by government subsidies and 50 million by donations.

But the project languished for a few years because not enough money could be raised, especially at the start of the Roh Moo-hyun administration.

The memorial association said it was only able to collect 10 billion won until 2005, or 20 percent of the projected amount.

The memorial association said that after the project was downsized the budget amounted to 22.2 billion won, with 2 billion won coming from donations from civic organizations and individuals.

Construction on the facility stopped in 2005 due to a lack of funds. Then the situation worsened as the Roh administration tried to take over the government subsidy that had been granted by the Kim Dae-jung administration.

By then the Roh administration had confiscated 17 billion won from the memorial association though it had already spent 3.8 billion won on design and foundation work. 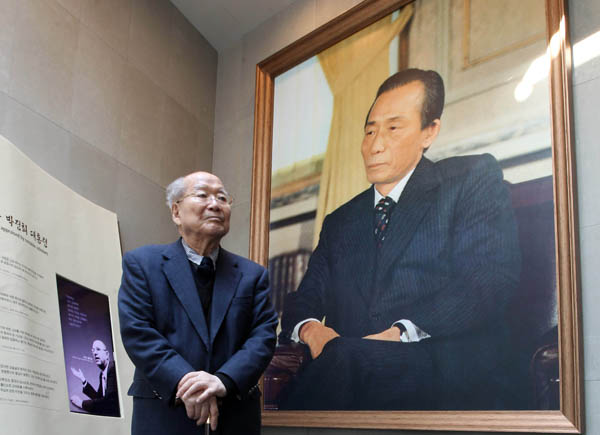 “At the time we needed to collect 40 billion won in order to keep the government subsidy and continue the project,” Kim Chung-yum, the chairman of the memorial association said.

“I felt sorry that the government wasn’t supportive in developing one of the country’s most respected presidents. But I couldn’t give up because I believed that the memorial-library would help more Korean people to understand Park better.”

Kim Chung-yum was one of the closest aides to Park when he was the president from 1963 to 1979, serving as the presidential secretary for nine years and two months and also working as a high-ranking official in the administration.

The project was halted in 2005 as the memorial association filed a lawsuit against the Roh administration in 2005, claiming that taking over the government subsidy wasn’t fair.

In 2009, the Supreme Court ruled in favor of the plaintiff, saying that the responsibility for the delays in the project was on the government, as it had not been as supportive as it had promised.

The construction work was resumed in March 2010 as the Lee Myung-bak administration allocated 17.4 billion won in subsidies.

“I can’t understand why the government granted funds to establish a memorial hall for Park,” Min Mun-yeon, a member of the Institute for Research in Collaborationist Activities, said. “Park was the worst dictator in our history and the country’s democratization was delayed more than a decade because of him. He is also suspected of being a collaborator with one of the pro-Japanese groups while Korea was under Japanese colonial rule.”