Suspect in theft at ATM firm now in police custody

Suspect in theft at ATM firm now in police custody

A man who allegedly stole 146 million won ($130,000) from the vault of an ATM maintenance company in broad daylight in Cheongju, North Chungcheong, was arrested without warrant and is currently being investigated, the police announced yesterday.

According to the Cheongnam District Police, the 32-year-old man surnamed Choe was an employee of the company.

At about 1:20 p.m. Saturday, according to police, Choe entered an office of his company on the third floor of a building located in Yongam-dong, Sangdang District in eastern Cheongju.

He was using an office access security card stolen from a former colleague who had earlier retired. 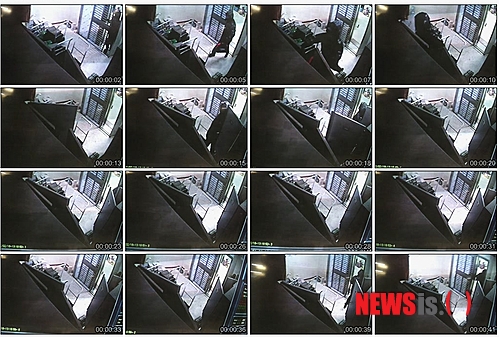 He picked up a vault access card on a desk in the office, where company policy demanded that it be kept, and then headed towards the vault, which he opened with the card.

Stacks of 10,000 won and 50,000 won bills filled the enclosure. He transferred some of them into a black bag he had brought with him, left the building and went to a car parked outside.

The process took only minutes, according to the police account.

This was not Choe’s first theft from his company, the authorities added. He made off with about 15 million won on Feb. 13 and on Saturday added 131 million won to his total haul.

The cash was intended for restocking ATM machines at banks throughout the Cheongju area.

According to police, Choe had gambling debts of 60 million won.

There had been two employees working in the office on Saturday, but one was called away to repair an ATM machine at a nearby bank 10 minutes prior to the break-in.

The remaining employee left the office briefly, leaving the access card on the desk.

The employee later said, “I left my seat for five minutes. When I heard the alarm bell I ran back [to the office] and found the vault door open.” Security officers arrived within ten minutes.

Suspecting that the thief was someone who understood the security system of the vault very well, probably an insider, the police questioned the company’s employees and reviewed CCTV footage around the building, which lead to Choe’s capture. The police obtained a confession from Choe on Sunday evening.

The police plan to apply for an arrest warrant for Choe for theft, they said, adding that the incident also showed several gaping holes in the company’s security procedures that might be replicated at other companies who deal in large amounts of cash.