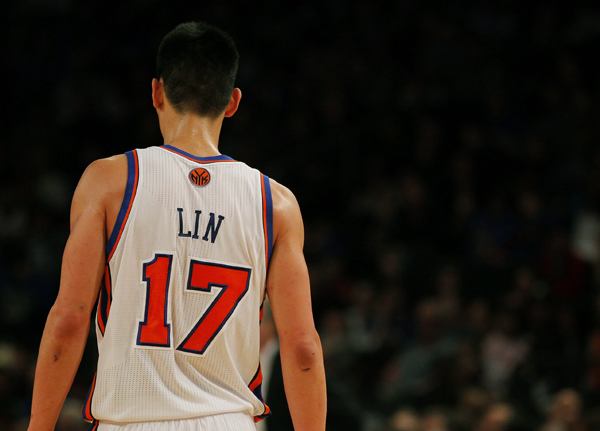 New York Knicks point guard Jeremy Lin walks up the court against the Dallas Mavericks in the first half of their NBA basketball game at Madison Square Garden in New York on Sunday. [REUTERS/YONHAP]


It seems Korea has also been swept up by the Linsanity taking over the basketball world.

Whenever New York Knicks point guard Jeremy Lin takes to the court, local Web portals obsess over his performance. Some critics point to the high number of turnovers Lin has had while others simply speak of the 3-pointer he scored over Dirk Nowitzki, the 38 points he dropped on the Lakers or his buzzer-beater from behind the arc to beat Minnesota.

The 23-year-old Harvard graduate was born in Los Angeles and is the first American of Taiwanese or Chinese descent to play in the National Basketball Association. One obvious reason why Lin is popular among Korean basketball fans is his Linderella story, rising to the top of the NBA after being passed over by every team in the league.

But perhaps another reason is the fact that the point guard for one of the world’s most popular franchises is one of the few Asians in the NBA.

Lin’s performance is breaking stereotypes and inspiring Koreans, showing that Asians can also do well in the world’s best basketball league that is largely dominated by African-Americans.

Although he is American, it is no secret that Lin has suddenly become the representative of Asians in the NBA. (If you’re struggling to understand the phenomenon, just think of why Park Ji-sung of Manchester United is also adored in other Asian countries.)

In recent weeks, fans here have talked about the possibilities of having a Korean basketball player in the NBA.

So far, the only Korean to have played in the NBA is Ha Seung-jin, who is now with the Jeonju KCC Egis in the Korean Basketball League. Ha, the 221-centimeter (7-foot 3-inch) center, was the second-round (46th overall) draft pick of the Portland Trailblazers in 2004, but for two seasons he never found himself as a starting member. In his 46 games, Ha averaged 1.5 points and 1.5 rebounds while playing 6.9 minutes per game.

Ha was one of a number of Asian athletes that made it to the NBA because of their size.

Unlike the Asian centers of the last decade, Lin is tearing apart top NBA defenses as a point guard. While the 175-centimeter-tall Japanese point guard Yuta Tabuse played for the Phoenix Suns for four games in 2004 before he was waived, the NBA has never seen an Asian star bringing the ball up the court and dishing it to the inside players.

Local basketball pundits have said that it will be difficult for a Korean player to make it in the NBA as a point guard because there is currently no such player who has a physique like Lin (191 centimeters, 91 kilograms or 200 pounds) or his skills. But as Lin’s story shows, anything is possible.

Another reason why Lin is getting a lot of attention in Korea is the fact that he graduated from Harvard with a 3.1 grade point average in economics, one of the most challenging majors. In a country like Korea, where people are crazy about their children’s education, the fact that he got into Harvard may be more surprising to some than him making it in the NBA.

For young athletes in Korea, it’s either study hard or practice hard. Keeping up with sports and academics seems to be almost impossible. Athletes need to study. The problem of the current situation is that those who choose sports as their future, but fail to become A-list performers later, suddenly have nowhere to go.

Just like Kim Yu-na in figure skating and Park Tae-hwan in swimming, there is always the possibility that some day a Korean point guard will make it to the NBA. But we can’t just expect these types of players to make it regularly.

What we need in this country is to set up a good environment that promotes studies and sports at the same time.

With that satisfied, Koreans could see a player like Lin in the future.