Ticket to London on the line

Ticket to London on the line 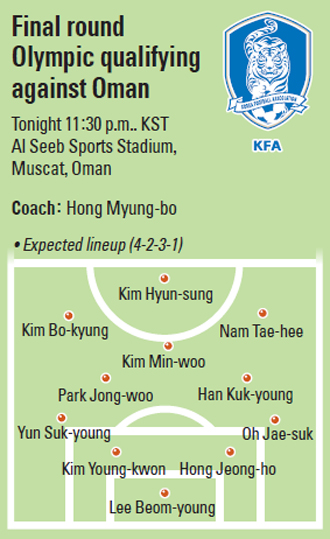 The Olympic football team will face its toughest test yet as it looks to clinch a seventh consecutive appearance at the Summer Games tonight. The Taegeuk Warriors, leaders of Group A, will face second-place Oman at Al-Seeb Sports Stadium in Muscat for the two teams’ second-to-last qualifier.

Korea, led by coach Hong Myung-bo, is in first with eight points from two wins and two draws, but is only one point ahead of Oman. A victory tonight would clinch a pass to London, but a loss or draw would push the decider to the final Asian qualifiers.

Korea plays Qatar on March 14 and would have to wait for the result of the Oman-Saudi Arabia match to know its fate.

There is still a possibility for the runner-up of Group A to advance to the Summer Games. But to do so, the team must first go through a round-robin playoff with the other two second-placed teams before playing Senegal, the fourth-placed team from the African qualifiers.

This can all be avoided with a win tonight, and coach Hong has been emphasizing that the team will do just that and return to Korea with the Olympic ticket in hand.

The Under-23 team had beaten Oman in its last three encounters, including a qualifying match last September which Korea won 2-0, but Hong has been warning players that such optimism could ruin the team’s atmosphere.

What brings more concern to Hong’s side is that the team has never won in the Middle East.

With the long traveling distance, different pitch conditions and pressure from zealous home fans, the young Taegeuk Warriors have so far only managed to pull off draws in their last three games in the region.

To prepare for the crucial match, Korea had a five-day training session in Dubai, United Arab Emirates, to adjust to the climate. The team landed in Oman on Sunday and has been practicing at a football field in the Sultan Qaboos Sports Complex.

Hong has urged his players to concentrate on how to make an efficient press against the opponents. The 43-year-old coach, who was a renowned defender back in his playing days, was telling each player when to move forward and where to play their position.

The coach said he learned from the previous qualifier against Saudi Arabia, which Korea survived with a 1-1 stalemate with a last minute goal, and will patch the problems that bothered them previously.

“We allowed too much space and penetration against Saudi Arabia in the previous qualifier and that is why we didn’t perform well,” Hong said to Yonhap News Agency on Monday. “Our players didn’t know the proper timing and where to press that match, so I just let our players to recognize that problem.”

Football pundits say the key factor for the Olympic team to perform well is to score the opening goal. In its previous three away games, Korea surrendered the first goal to their opponents and had a difficult time controlling the game from the start.

Some good news for Hong is that left back Yun Suk-young has recovered from an ankle injury while attacking midfielder Nam Tae-hee has joined the team after showing a strong performance with Qatari club Lekhwiya SC. Nam has scored four goals and had three assists in eight games since joining the club in January.

“Nam can play any position in the attacking line and he is smart to know what he needs to play,” Hong said. “If he gets onto pitch, I think the rest of the players should support him to carry out his role.”

Along with Nam, midfielders Yoon Bitgaram and Kim Bo-kyung are also key players to watch as both scored against Oman in the previous qualifier. Kim has netted nine goals with Hong’s team, more than any other player in the squad.

“Since the Olympic ticket is on the line, we will win the game,” Hong said.