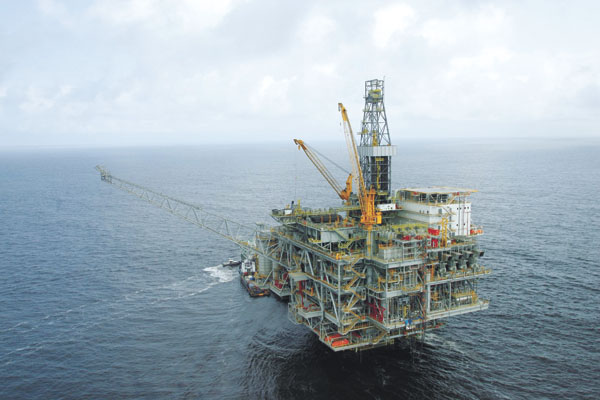 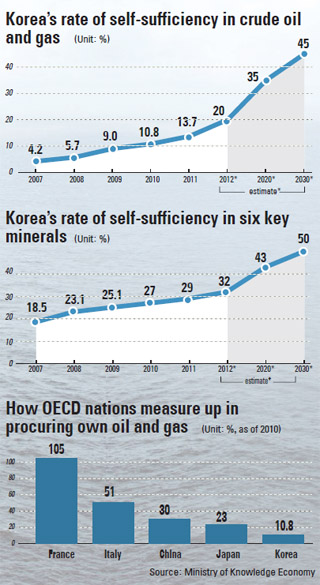 As of last year, Korea provides 13.7 percent of its own crude oil and natural gas needs, having fallen just short of the original 14 percent target, but Hong said the government intends to raise this level to 35 percent by 2020.

Also in 2011, the country secured 29 percent of the total annual amount of six key minerals it requires - soft coal, uranium, iron, copper, nickel and zinc - with much of this sourced from development projects outside Korea.

This is considered one of the more impressive achievements of the incumbent Lee Myung-bak administration, which has stressed the importance of investing more in overseas projects to become more self-sufficient in the realm of natural resources since it ascended to power in early 2008.

Developing natural resources is high risk, however, and demands enormous investments that take a long time to recoup. As such, it is more suitable for state-run than private companies.

Yet there is mounting concern that the current administration and public corporations have been blindly pursuing such projects - some of which have been much hyped by the government as promotional tools - without taking into due consideration their value.

Together with public companies, the government has been pouring money into efforts to acquire sources of crude oil, natural gas and minerals abroad.

The ramped-up efforts are clearly respected in the budget allocated to this area by the state-run Korea National Oil Corp. (KNOC), which increased its investment in overseas resources development to $4.7 billion in 2010 from $649 million in 2007. Meanwhile, Korea Resources Corp. also hiked its outlay to 366.4 billion won ($326.3 million) in 2010 from 43 billion won in 2006.

Successive administrations have signed nonbinding MOUs after their presidents have held summits with heads of resource-rich nations and used the deals to promote their own achievements, he said.

Even if contracts were signed, they were often limited in scope, for example offering the country the basic right to mine for oil, but Seoul has tended to publicize them as though reserves had already been located and piped to the surface.

In a separate case, when former President Roh Moo-hyun visited then-Russian President Vladimir Putin in 2004, Seoul initially said it had secured an oil field with a maximum reserve of 10 billion barrels in west Kamchatka Peninsular in the Far East. However, the project became a money-loser, gobbling up 300 billion won of funds after exploratory work led to the conclusion that its development was not economical.

While still president-elect, Lee Myung-bak visited Kurdish Regional President Masoud Barzani in February 2008 and agreed to develop five oil fields in the region. The government claimed at the time that it had secured 1.9 billion barrels of oil - enough to feed demand in Korea for two years.

The project started with much fanfare and was praised as a diplomatic success of the Lee administration in overseas resources exploration, in what now looks like a premature wave of euphoria. According to Lee Hak-jae, the KNOC has to date drilled four holes in the oil fields but found little or no reserves, effectively pouring 440 billion won down the drain.

The lawmaker pointed out in a recent statement that summit diplomacy is not a sensible way to approach the task at hand.

“Summit diplomacy is actually a barrier to developing resources because it tends to serve as a substitute for a thorough feasibility study,” he said. “It is better for the relevant institution to proceed slowly and cautiously.”

Lawmaker Lee said that from the beginning the Kurdish project posed a number of problems, and that the KNOC did not fully review whether it would realistically yield sufficient reserves of crude. Just four months after the president visited the Kurdish region, the Korean oil company and the Kurdish government signed a contract including infrastructure construction deals worth $2.1 billion.

“What is even more problematic is that for the KNOC, it was a ‘mission’ that had to be successful because it was a deal between the President-elect and the Kurdish government,” the lawmaker said. “This meant the KNOC was less likely to take into consideration all of the economic aspects of the project. Even it had conducted a proper feasibility study, it was compelled to see the project through so as not to embarrass the president.”

In response, the government claims that it is too early to say whether the project has failed as it is still in an embryonic stage.

“Britain had to drill 33 holes for 15 years to develop its oil reserves in the North Sea,” said Lee Kwan-sup, deputy minister for energy and resources policy at the ministry. “Korea also succeeded in exploring natural gas in the East Sea on its 15th drilling, and it took 10 years.”

“There are a lot of stages to developing resources, such as conducting a geographical study, exploration, drilling and production, and it often takes several years or even a decade to get tangible results,” said Lee Chang-woo, head of the Department of Energy and Mineral Resources Engineering at Dong-A University.

“At each stage, the governments of resource-rich nations can have a critical impact on how much it is going to pay off. There is more at play than just economic logic,” he said.

“Human networks also play a significant role .?.?. and heads of states in developing nations often hold the key to the project’s success,” he said, adding that, contrary to lawmaker Lee’s argument “summit diplomacy is necessary.”

“However, it is also essential that objective evaluations come first. This is what the current administration has overlooked,” the professor added.

The government concurred that diplomatic efforts are necessary for greasing the wheels of such projects.

“In resource-rich countries, the determination and will of heads of state is the key to successfully carrying out these kind of development projects,” said Jeon Min-young, a director of the related department at the knowledge ministry.