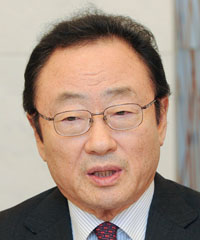 Sakong Il dismissed criticism of his replacement as chief of the country’s largest private trade promotion organization yesterday, saying that former envoy to the United States Han Duck-soo is the most qualified candidate to help Korea achieve its goal of securing free trade pacts with major economies, among other agendas.

The current chairman of the Korea International Trade Association (KITA), who steps down today, has taken much flak recently for the government’s revolving-door appointment system, but he also argued that Han’s political connections were an asset.

“I recommended Han [for the role] because I knew he was always ready to resign as ambassador and come back to help work on free trade agreements,” Sakong said at his outgoing press conference at a hotel in southern Seoul on Monday evening.

He expressed confidence that Han will do the job better than other candidates given his former role in leading FTA negotiations with the U.S. during the former Roh Moo-hyun administration.

Han, who stepped down as Korea’s ambassador to the U.S. just 10 days after Sakong announced his retirement on Feb. 8, was tapped as the next KITA chairman by the association’s senior executives on Friday.

Sakong said he is looking forward to taking some time off, and rejected as untrue rumors that he was eyeing the newly vacant post. “I want to leave the government to work as an independent economist and professor.”

He also fought back criticism that, under his stewardship, KITA had been biased in favor of government agendas, rather than fairly serving the interests of small traders.

“I have visited all 13 industrial complexes in the country, including on Jeju, and listened to workers there,” he said, adding that “the role of the KITA chief is to serve as a bridge between private traders and the government .?.?. It calls for someone who can communicate with the government to inform bureaucrats of small traders’ difficulties.”

Sakong, a close aide to President Lee Myung-bak, has been criticized by small and medium-sized trading companies for ignoring small traders’ needs. An online community of merchants earlier called for his replacement to be a chairman from a private company.