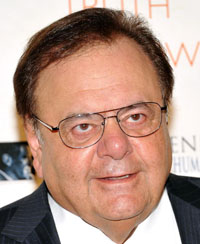 ALLENTOWN, Pennsylvania - Paul Sorvino finally might be over his trouble with “The Trouble with Cali.”

The “GoodFellas” star and first-time director shot the independent film in Pennsylvania six years ago after landing $500,000 in public funding.

But the project ran short of cash, and politicians demanded to know what he did with their investment.

Sorvino hopes all that’s in the past now that “Cali” is about to get its first screening. It premieres Tuesday at Arizona’s Sedona Film Festival.

The 72-year-old actor says he’s proud of the black comedy about an aspiring dancer and her dysfunctional parents. He calls it “the little film that could.”

The movie deal was originally pushed in 2005 by then-Lackawanna County Commissioner Robert Cordaro, who called Sorvino a “hometown hero” and said his decision to shoot in the county seat of Scranton would boost the region’s attractiveness as a low-cost destination for filmmakers.

Cordaro lost re-election in 2007 and was later charged with shaking down businesses that held county contracts. He was sentenced last month to 11 years in prison on bribery and extortion counts.AP