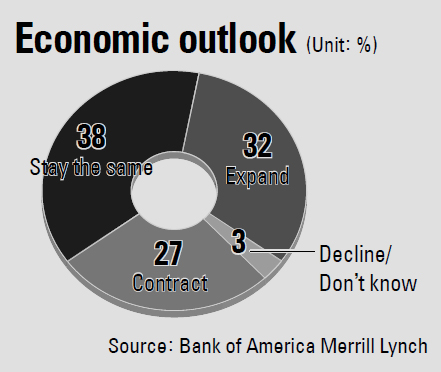 Major economies in the Asia-Pacific region are expected to concentrate their exports on local emerging markets this year as fears linger that advanced markets will continue to be plagued by slow growth.

According to a report by Bank of America Merrill Lynch, 64 percent of chief financial officers (CFO) in the region expect to see the level of business they conduct within Asia expand in 2012.

However, only 35 percent of companies that export to the U.S. believe sales to this market will rise, while even fewer, or 33 percent of those that target Europe, expect higher sales.

The study was based on a survey of 465 CFOs of companies with revenues in excess of $500 million in seven countries, namely, China, India, Japan, Hong Kong, Singapore, Korea and Australia.

The report has been released for the past 14 years in the U.S. but this marks the first time it has focused on and been made available in Asia.

“Asian companies are showing a strong interest in overseas markets, but most of their trading activity is expected to be concentrate on other Asian markets,” said Ahn Sung-eun, chairman of the bank’s Seoul office.

“In general, Asian companies’ interest has been shifting away from advanced economies in Western markets to emerging markets.”

The report also pointed to South America and Africa as having significant potential for growth as trading partners for Asian companies.

However, Ahn stressed that the majority of companies in the region plan to stay local as they see Asia as a safer bet.

“Even if Europe solves the sovereign debt crisis it is facing, there is a general belief that it will inevitably face a light recession throughout this year. As for the U.S., even though the situation there is looking up, its economic growth is expected to be limited to between 2 percent and 3 percent this year,” he added.

In fact, the survey showed that the majority of CFOs pointed to the European debt crisis as the biggest concern for 2012, followed by the U.S. budget deficit and the economic slowdown in China. Rising oil prices and inflation were also cited as major threats to growth.

Among the countries surveyed, Japanese CFOs were the most worried about global economic uncertainties. Their counterparts in Singapore were next followed by Korea. All three countries are heavily dependent on exports, with Korea recently tilting the balance past 50 percent, and susceptible to international commodity prices.

The study also showed the strong influence China wields over the Asia-Pacific region.

“China ranks as Korea’s largest export market, equivalent to both Europe and the U.S. combined,” said Lee Jae-woo, chief economist at Ahn’s office in Seoul. “The Asia-Pacific region will feel the impact regardless of whether China’s economy grows by 8 percent or 9 percent,” he said, highlighting the small difference a slowdown there would make in the short term.

Meanwhile, senior executives in Asia are gunning to expand their operations by chasing up more mergers and acquisitions, the report found, with China and Singapore emerging as the most aggressive countries in this respect. Yet Korean companies were among the most hesitant to go down this road, with 69 percent of respondents saying they have no intension of seeking such deals this year, compared to 22 percent who responded positively.